Kevin Garnett Fires Back at LeBron James: Mind Your Business 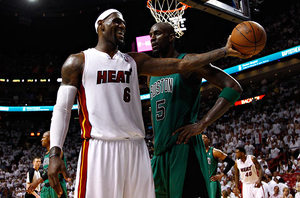 It may just be the preseason, and some of the characters are in strange, new uniforms, but the rivalry between LeBron James, Dwyane Wade, Kevin Garnett and Paul Pierce rages on.

Both sides continue to lob verbal grenades toward one another — after being called out by LeBron and Wade for being hypocrites, KG and Pierce fired back.

“Tell LeBron to worry about Miami,” Garnett said after the Nets beat the Heat 86-62 in front of a sellout crowd of 17,732 at Barclays Center Thursday night. “He has nothing to do with Celtic business.” As for Pierce, when the question was posed to him, he answered with one of his own: “I left Boston?”

“We’re trying to install that here,” Pierce said. “They’ve taken what we’ve tried to accomplish the last couple years in Boston. We’re here in Brooklyn now, and it’s the same type of attitude. They’re the champs, they’ve got what we want, and we have to go through them to get it. We’ve got to just help everybody understand that it’s not going to be easy, and we’ve got to win.”

Words were backed up with action on the court last night, even though it was a meaningless exhibition game. Kevin Garnett raked LeBron James across the face in the first quarter, and Paul Pierce laid into him with a hard foul on a fastbreak. One can only imagine what will take place once the regular season — and hopefully, Playoff — matchups between these two squads take place.

In an age of far too many buddy-buddy NBA relationships, it’s refreshing to watch a group of players that simply hate each other.