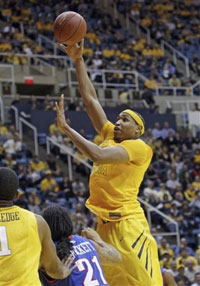 The Oklahoma City Thunder LOVE these types of players, and with the 28th pick in the 2012 NBA Draft, they will take somebody who fits this mold. They’ve been building a hard-working structure ever since General Manager Sam Presti took over on June 7, 2007—back when the franchise was still in its SuperSonic days (feels weird just writing that).

A half decade later, the Thunder have turned into one of the most competitive, well-rounded and high-character teams in the NBA. And there’s no sign of their strategy changing any time soon.

Despite losing in the NBA Finals to the Miami Heat, the Thunder kept calm, cool and collected and took the loss(es) in stride. There’s no doubt that the invaluable experience from this lockout-shortened season will fuel them back to this point in the future. And hopefully for their sake, OKC will make it over the hump.

Considering the true versatility of their roster, OKC needs to take the player who be willing to scrap for loose minutes; to make an impact in any way he can; or at the very least, to spark intensity during practice while earning those sought-after minutes rookies yearn for.

With the 28th pick in the 2012 SLAMonline Mock Draft, the Oklahoma City Thunder select…

Though his scoring regressed slightly between his sophomore and junior seasons, Kevin Jones made his presence felt during his fourth and final season as a Mountaineer, averaging an impressive double-double of 19.9 ppg and 10.9 rpg.

Over his four years in Morgantown, Jones evolved from a simple, face-up shooter to a guy who efficiently utilized his high-energy motor, length and improved athleticism. These traits allowed Jones to score in the paint and make things easier for his team and himself. His free-throw attempts increased from 1.3 per game as a freshman to 4 per game as a senior.

If the Thunder draft him, he will force OKC’s big men to step out to the perimeter to guard him during practice. Though he only shot 26 percent from distance as a senior (surprisingly low for a guy who showed so much promise early in his career), Jones is considered a perimeter threat. Should he be surrounded by more talent, he should become a more efficient outside shooter.

Despite being called unathletic and too slow, Jones has skills that cannot be taught. He’s tough and hard-working—both of which aren’t guaranteed when you’re taking a player toward the end of the first round (or in general, for that matter).

These characteristics, along with being mature and caring about the team, are prerequisite traits that the Oklahoma City Thunder staff appreciate as much as any team in the NBA.

True to their philosophy, don’t be surprised to see Jones off the board to the Thunder at No. 28.