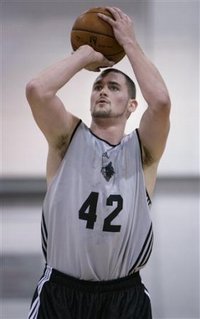 The Kevin Love Era is underway in Minny, and already, it’s facing some resistance from the local press. Did I mention that said resistance is occurring after having watched Love play in, let’s see here, oh yes, ONE PRE-SEASON GAME?

No matter, some are ready to declare this a “budding disaster”. Fun.

From the Star Tribune:

And when it came to ineptitude, no one compared to Love. The rookie played 24 minutes and went 1-for-10 from the field. He was credited with five rebounds and two turnovers.

There was one glaring impression from the time Love spent on the offensive end: How is this rookie going to get the ball in the basket against NBA big men?

Now, there’s absolutely no doubt that K-Love is going to experience some absolutely atrocious nights on the floor; he’s a rookie after all. Everyone goes through it. And it’s even entirely possible that the Wolves made a terrible mistake when they traded away OJ Mayo on draft night.

That being said, however, wouldn’t it make sense to withhold judgment on the entire thing until, I don’t know, the season officially begins perhaps?