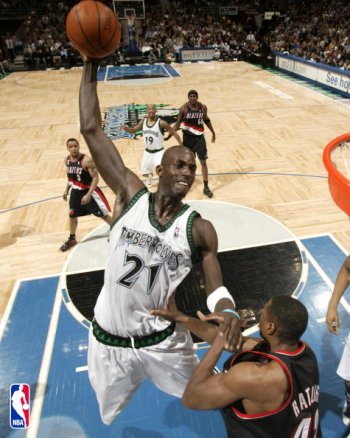 It’s very difficult for me to watch Kevin Garnett play basketball. He causes me to have too many headaches. See, on one hand, he is the perfect ball player: He passes, rebounds, ALWAYS plays hard, can score whenever he wants, and defends with an unmatched ferocity. Then again, he tries to play the game too perfectly. Hear me out.

Garnett, in many ways, is John Wooden’s walking wet dream. He’s the perfect teammate, a guy always looking to make the extra pass, a guy who would never stray from the team’s philosophy. Unfortunately, this is part of the reason why his career so far has been kind of a let down. Too many times, he fails to realize that when his teammates are showing off their trademark ineptitude, it’s time for him to take over. Dude simply doesn’t have enough Kobe in him.

About a month ago, I spent an entire evening watching League Pass, and happened to stop by a Rockets/Wolves game in Houston. The game was close going into the fourth, but the wheels began to fall off for Minny because they couldn’t defend anyone and forgot how to shoot the basketball in the closing moments. At one point, Yao scored a laughably easy basket as the Wolves failed to properly rotate on defense, and Garnett practically lost his mind. He started yelling at the coaches and players sitting on the bench and let his guys on the court have it too. He then demanded the ball on the next trip down the floor, ignored the fact that he was triple-teamed, and scored on a very tough turnaround. Of course, this was the last time he asserted himself offensively in the game, and the Wolves wilted away down the stretch.

For a moment, if you ignore how badly Wolf management has been over the years, the preceding paragraph tells me everything I need to know about Garnett’s career. That he is a surefire Hall of Famer is without question; it’s that he lacks that killer instinct to take matters into his own hands when sh*t hits the fan. Too many times, he insists on sticking to the offense and the coach’s plan instead of imposing his will on the game. One of the few times where he said “to hell with it” and took over (the 2004 playoffs), the Wolves finally got out of the first round and nearly beat a stacked Laker team in the Western Conference Finals.

Last night marked another “to hell with it” moment for Garnett. With the Wolves playing frustratingly inconsistent ball and on the verge of losing to the Pacers, KG finally had enough:

“I just said I’m not going to let us be like this,” Garnett said. “I’m going be assertive more than ever. To hell with the offense.”

Kevin scored 29 (on a season high 26 shot attempts) and grabbed 19 boards in the seven point road win. Randy Foye was the only other Wolf to reach double figures (10 pts). KG, if management isn’t going to do anything to help you out, I wouldn’t mind seeing a few more nights like this from you. I suspect more than a few Minny supporters feel the same way.