KG: Out for the Playoffs? 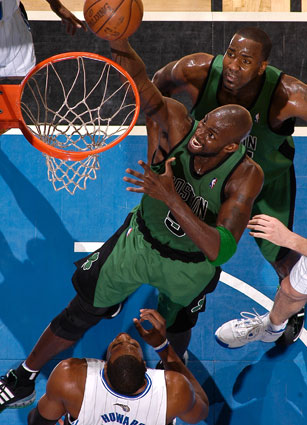 According to Doc Rivers, the Celtics’ attempt to repeat as champs may have just suffered a very serious blow. From the AP and the Boston Globe:

Boston Celtics coach Doc Rivers says there is a strong possibility that Kevin Garnett will miss the whole postseason. The All-Star forward has missed most of the last two months with a strained right knee. He had been recovering with an eye towards the playoffs, but Rivers said he had to shut Garnett down at practice Thursday morning and “there’s no way” he could play right now.

Rivers said on a radio show that Garnett was frustrated but understood that it was the right thing to do.

“This is the first time I’ve said it, because it’s the first time I’ve really watched him,” Rivers said. “He’s not gonna be ready. After watching him run, there’s no way. So, we’re gonna move without him. And the way I saw him move today guys, I don’t know if he’ll be ready… he’s just limping. He just can’t run…This was an honest run today, you couldn’t fake your way through it … and the guy is a warrior, you can see him trying to mask it, but after 20 minutes of running, there’s just no way. I don’t see it. I just don’t. And I’ve flipped completely because I was watching him move, and he looked great, and then … after today, there’s no way he can play.

“If he can’t get through biking and working out without swelling and stiffness and his leg locking, I just don’t know how you play in the playoffs.”

‘Tis a dark day in Boston.