KG Will Ring In Opening Night In Style 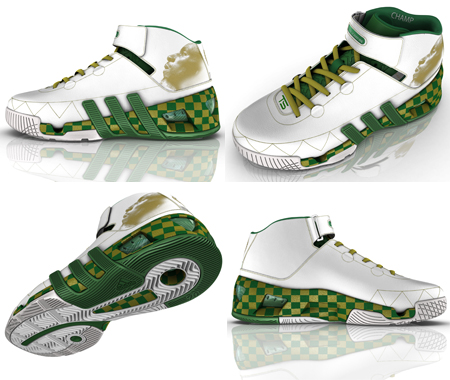 In honor of the man’s first NBA championship, adidas has something special lined up for Kevin Garnett on opening night.

KG will be wearing a special customized 2008 champions version of his Team Signature Commander shoe when his Celtics host LeBron and the Cavs in Boston on Tuesday night. The shoe is as much a tribute to KG’s first championship ring as it is the Celtics legacy.

The white, green and gold colors are inspired by the Larry O’Brien trophy, while the insole has the dates and scores of all six of the 2008 Finals games and the NBA champions logo.

Now, why these shoes will be so difficult to get a hold of. There were only 17 pairs made–you guessed it–in honor of the C’s 17 world championships. That doesn’t mean that you can’t get a pair, though. You can bid for one of the 17 pairs at the Celtics shop, starting Tuesday at 8 p.m. ET in conjunction with the game’s tip-off.

All cash raised from the auction will go to the Boston Celtics Shamrock Foundation, which benefits local children through education and community support programs.

adidas has also made limited edition Celtics’ championship jerseys, warm-up jackets and a Superstar 1. All of these will be available at the NBA Store in New York, the Celtics Shop and the TD Banknorth Garden Pro Shop.