Khris Middleton gets the bounce as the clock expires for a thrilling Bucks' victory. 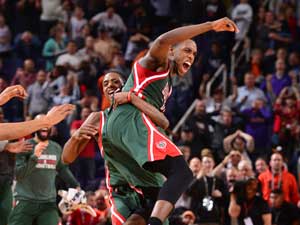 Opening with a big lead was a recurring trend in multiple games on Monday night in the NBA. Having lost two in a row on the road, the Cavs were back at home in Cleveland yesterday when they hosted the Charlotte Hornets. LeBron James (27 points, 13 assists, 7 rebounds) and the Cavs tipped off the match-up with a 21-0 lead, stifling their guests. Kemba Walker (24 points and 5 assists) led the Hornets’ rally in the second and early third quarters to remain in the game. But the team in Wine and Gold went on another run, 21-9, before the third quarter ended to carry a 12-point lead into the fourth. Kevin Love (22 points, 18 rebounds, 4 steals), LeBron, and #TheLand held on to win it 97-88.

Unlike Sunday’s game in which Kobe Bryant passed Michael Jordan to become third on the NBA’s all-time scoring list, last night’s Laker loss in Indiana wasn’t filled with any glory. The Lakers had an U-G-L-Y first half. They shot 3-20 in the first quarter and 4-23 in the second—just 16 percent at the midway mark in the game. Trailing 60-27 heading into the third, L.A. tried to get some baskets to go. They did—good enough for 64 second half points, but the deficit Rodney Stuckey (20 points, 10 rebounds, 7 assists) and the Pacers built was far too much for the Lakers to handle.

‘Twas all about Celtic sophomore Kelly Olynyk in Boston’s blowout victory over the 76ers last night. The 23-year-old scored a career-high 30 points off the bench to end his team’s three-game losing streak and hand Philly their fourth consecutive loss. The Sixers’ rookie Nerlens Noel (19 points, 8 rebounds) had a career high of his own, but with Olynyk’s performance and 25 fast break points compared to the home team’s 1, the visiting Celtics proved they had the upper hand in this one.

The Atlanta Hawks’ Twitter emoji game is quite strong—they have a “Korver Kounter.”

Much respect to the person behind that account because as I’m sure I made clear before…I love a good tweet. And well, much respect to the Hawks too because they silenced their critics (temporarily at least—some people don’t give up) by getting a solid victory over a squad with a winning record. The two teams fought a close battle when the Bulls came to town last night (the biggest lead was 10 points). But come time to secure a W, Al Horford (21 points, 10 rebounds, 6 assists) hit a jumper off an assist from Kyle Korver (12 points and 4 assists) with 57.7 remaining to put the Hawks up by 5. Pau Gasol (13 points and 12 rebounds) cut the gap to 3 after tipping in his own miss, but it became a matter of knocking down FTs after that—which the Hawks did to earn their third win in a row.

It was a quarter by quarter battle last night in the Air Canada Centre. The first period was a normal one, with Kyle Lowry dishing out 3 assists and scoring 5 points, you know—doing his thing for the Raps as usual. In the second, the Raptors didn’t score for the final 6:52 of the period, which allowed the Magic to outscore ‘em 27-16 despite Evan Fournier (11 points) needing to get facial stitches due to an elbow under the basket. The tables then turned in the third, with Lowry once again taking over. He finished with 17 points, 8 assists and 5 boards. The Raps held Tobias Harris (18 points, 6 rebounds) and the Magic to only 13 points in the third as they themselves cruised to 27. They pulled away in the fourth quarter for the W and had this fun moment for their post-game interview:

Is it bad luck? Deja vu? Whatever you call it, this buzzer-beating, game-winning 3-pointer that got the fortuitous bounce defeated the Suns not once—but twice. It was Blake Griffin last Monday, and yesterday night, credit goes to Khris Middleton (14 points).

Ouch, that’s gotta hurt. Both teams knocked down six straight shots in the final 41 seconds of the game, but the one you see above sealed the win for the young Bucks. The Suns—who lost their sixth straight—played without Goran Dragic, and the Bucks lost Jabari Parker to a knee injury early in the third quarter. The Bucks’ bench did work last night, scoring a total of 50 points to complement Brandon Knight’s 20. Milwaukee outscored the Suns in the paint 50-23 and overcame the 14-point lead Markieff Morris (25 points) and Co. built in the second quarter for a W that brought them over the .500 hump once again. I’ll leave off with whatever the heck you want to call this:

The Portland Trail Blazers recognized LaMarcus Aldridge prior to the game last night for moving into second place all-time on the team’s scoring list. Once the game commenced, LA showed no signs of slowing down as he finished with 23 points and 14 rebounds on the night—including a near-perfect third quarter, in which he shot 7-9 from the field. He got help from his star teammate, Damian Lillard, who also scored 23, snagged a career-high 10 rebounds and handed out 6 assists.

The Blazers put down the short-handed Spurs, who played without Tim Duncan (rest) as well as Manu Ginobili, Patty Mills, Tony Parker and Tiago Splitter all because of injuries. Portland added Robin Lopez to their own injury list, who suffered a broken hand while going up for a board in the third quarter.

In a dominating win at home, all the Clips shared the glory as Coach Doc played 13 of his guys. Already up 11 at the half, Blake Griffin and the Clippers went on a 23-9 run to start the third quarter. Griffin finished with 18 points, 7 rebounds and 7 assists, including this dish to DeAndre Jordan (16 points and 15 rebounds) for the slam: