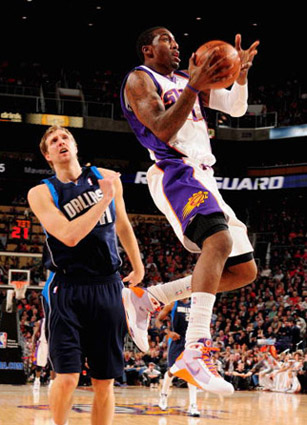 For many fans, it was hard enough last year to watch Amar’e Stoudemire walk away from the Phoenix Suns and sign with the New York Knicks. Now, STAT may be walking away from another long-term hoops relationship, as he recently said on Twitter that he’s weighing his footwear options, since his deal with Nike is almost up.

“My shoe deal is about up. I wonder who I should sign with. Nike, Reebok, Adidas, Under armour, or build a company up into a power show company”

Wherever Amare’s feet lead him next, we thought now’s as good a time as ever to take a look back at his (sneaker) career and the Nikes he’s worn since coming into the league, way back in 2002.