Kings Co-Owner on DeMarcus Cousins: ‘We’re Not Trading Him’ 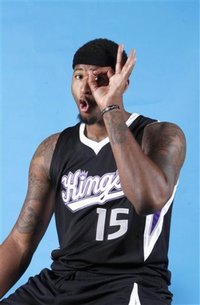 On New Year’s Eve, the Sacramento Kings lost handily to the New York Knicks at home (their third straight defeat), and after the game players openly blamed head coach Paul Westphal for the team’s ineptitude on the offensive end of the floor.

Things then blew up completely when Westphal suspended second-year forward DeMarcus Cousins, while taking the highly unusual (and bizarre) step of publicly announcing that Cousins had demanded a trade.

According to Kings co-owner Joe Maloof and GM Geoff Petrie, the team has no actual intention to trade the wildly talented (and troubled) 21-year old forward.

Many of his complaints after Saturday’s loss were right on point. Notwithstanding Sunday’s win over the rebuilding Hornets, the Kings effort had been lacking, the ball and body movement nonexistent, and a sense of cohesiveness nowhere to be found. For most of these opening days, the Kings have been solo artists, dribbling their way to three painful losses.

Seriously? Cousins wants to be traded? The Kings would be nuts to entertain a single phone call, which apparently are not. “We leave that stuff (the benching) to the basketball people,” Kings co-owner Joe Maloof said before tipoff, “but we’re not trading him.” They might have considered picking up the phone, though, and placing a pre-emptive courtesy call to Cousins’ agent, John Greig. That would have been prudent and mature and pre-emptive, and a clear indication that, amid the stormy season’s start, cooler heads indeed will prevail.

DeMarcus Cousins and his agent both alluded to the fact that no real trade demand has been made despite Paul Westphal’s claims.

Were I a betting man, I’d wager that when the dust eventually settles, Cousins will outlast his coach in Sacramento.