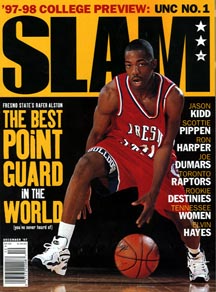 Last Saturday afternoon, a crispy day made for playing pick-up ball, the squad from Queens, NY’s Benjamin Cardozo High School rolled deep to the playground, bringing their entire roster. Ever! Well, almost ever. Ron “The Teacher” Naclerio became Cardozo’s head coach in 1981 and is a one of the most well known high school coaches in the country. For years before A.A.U. basketball monopolized their weekends, Naclerio gathered his players, past and present, to attend an “open-run” of sorts in the school yard of Public School 46 in Queens, not far from Cardozo’s campus. Last year, Naclerio and some of his former players brought back the ritual and now hope to continue the Cardozo High School Basketball Reunion as annual event for years to come.

“This has to be the biggest high school basketball reunion ever! I counted close to 200 former Cardozo players that are here today,” Naclerio says, pausing from running around like a madman in the chaotic schoolyard. “They love being here. To see the guys come back on a consistent basis shows me that they felt something special while they were at Cardozo. It’s one more day for them to get the chance to be part of Cardozo.”

As the past and present Judges (fitting nickname seeing as Benjamin Cardozo was one of American’s greatest jurists) played a rather sloppy pick-up game, the rest who lined against the black chain-linked fence reminisced. The crowd was filled with the local players that only the diehards would know. Guys like Duane and Brian Woodward, are here, both guards who put in solid careers Boston College and the University of Rhode Island, respectively, and are playing pro ball now. Also, Duane Causewell, who played 11 years in the NBA, is here and St. John’s point guard Darryl Hill, who is looking towards a pro career of his own. Royal Ivey of the Atlanta Hawks, who finished his schooling at Blair Academy in New Jersey, even got invited. And you already know Bobbito “Basketball is the Coolest Sh?t You Can Do in New York” Garcia was there, just hanging out.

Kids swarmed former SLAM cover boy Rafer Alston with anything they could to get his autograph on. Alston’s wristwatch was practically cooling the entire park and with the NBA season totally over, he’s clearly at ease being home in Queens. While many of them know him as Rafer, or “Rafe,” others, the young ones, know him as “Skip to My Lou,” the kid with the phenomenal handle that sparked the AND1 craze. “Cardozo was great for me. To come from where I’m from in Queens and to go to a diverse school helped me in life,” Alston said. “From the teachers, counselors, and to the coaches, there is a family tradition at that school. I took a lot from that.”

While his Rockets team left the NBA playoffs early, Alston might be one of the most improved guards in pro basketball. Aside from the “Skip to My Lou” stuff, he’s a second-round pick that spent a year in the CBA and accepted an embarrassing demotion to the D-League three years into his NBA career. This year he started every game for the Rockets and averaged 13-plus points and 5-plus assists. Playground legend or not, Alston’s NBA numbers don’t lie. Having posted career highs in points, assists, steals, minutes player and some other stats this season, it’s clear that he’s a legitimate starting point guard in the league.

“I remember when I would be playing with the older guys from Cardozo,” Alston says. “The coaching and the legacy of the school and the basketball program is what everyone here identifies with. I come see them play when I’m in town and I’m glad to see that Coach can still get so many people to come out and support us.”

Alston isn’t the only one that is glad. For Naclerio, it’s good to be able to see the guys he used to coach, some of whom traveled from Florida, Georgia and California to spend a few hours in the park with their old coach and teammates. Still, there are some others who are excited because for them, it’s only the beginning.

“This is my first year here and I love it,” says Judges’ point guard Trinity Fields, who transferred in from nearby Holy Cross High School. “Especially because of the legacy for having great point guards. I want to follow in their footsteps, that’s why I wanted the chance to come to school here.”

You guys may remember this column I did last month about paralyzed Brooklyn basketball player Alonzo George. Well, there was a nice story out about him in the NY Post yesterday: he’s going to be at his school’s graduation.