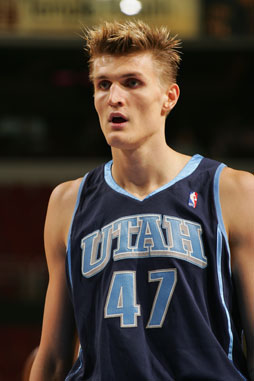 To be honest, I’m surprised it took this long: After a couple of tumultuous years in Utah, 26-year old do-it-all forward Andrei Kirilenko has asked to be traded by the Jazz. And this being the digital age, he did so by posting his trade demand via a blog entry. Of course.

From the Salt Lake Tribune (who had one of their staffers translate the Russian text to English from this website):

“In a week, I need to join the Utah Jazz again, but quite frankly, I’m not really happy about that,” wrote Kirilenko. “The past season was bad for me and I was really disappointed.

“I’ve thought about it a lot and I came to a decision. I want to leave Utah Jazz. The European championships that just ended became sort of a test for me and now I think I know what I want to do.”

“It’s their choice. I have only one request: Let me, myself, go in the direction I want to go. I don’t want to be there and mechanically fulfill a contract.”

For anyone who followed the Utah Jazz last season, this shouldn’t come as a surprise. For God’s sake, in the Playoffs, the man broke down and cried because he wasn’t getting enough minutes. Doing so under the scornful eye of Jerry Sloan, only the most hard-ass of men, probably didn’t help matters much.

By making his unhappiness so public, AK-47 has now put the Jazz into a very tough spot. Every team in the League will now be trying to hoodwink them into a bad trade since they know how badly Kirilenko wants to leave. According to Kirilenko, though, this public outburst may be the Jazz’s own doing: He claims to not have heard back from anyone in the organization for the last week.

Andrei is owed $63 million in contract money over the next four years.