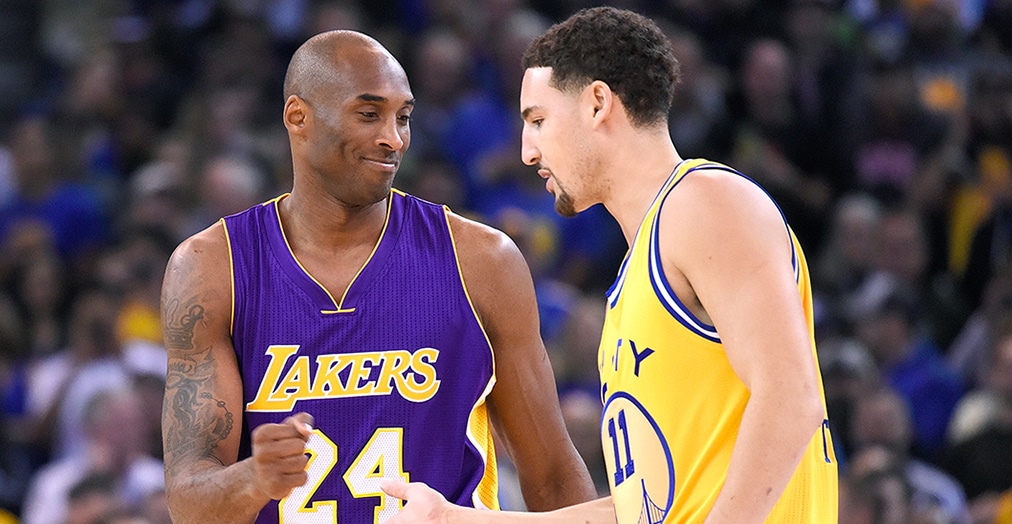 Twenty-four hours after dropping 25 points en route to a 112-97 win over the Dallas Mavericks, Klay Thompson and a few of his other Warriors teammates were at Sledgehammer Games, a video game development studio in The Bay, getting a tour of the facility and playing Call of Duty: World War II, the latest game from the Call of Duty franchise.

Thompson, an avid COD gamer, hopped on the sticks for a bit with JaVale McGee prior to traveling to L.A. to face the Lakers tonight, when the team will retire Kobe’s No. 8 and 24 jerseys.

We caught up with Thompson to talk Call of Duty, the Warriors’ brotherhood, his favorite Kobe memory and more.

SLAM: You guys are in LA [tonight], the night the Lakers are retiring Kobe’s numbers. Is it still weird when you’re facing the Lakers and he’s not out there?

Klay Thompson: Not really. This man gave 20 years—more than enough to that organization. He’s a worldwide icon. I do miss playing against him, but it’s an honor to play in front of him when his jersey’s getting retired. There’s a lot of hype over that game.

KT: Definitely the first time I ever played against him at STAPLES my rookie year [laughs]. That was surreal. I was always so fortunate enough to go watch him play, and to be on the court and not in the stands for the first time and [I] had a pretty good game, so that’s my favorite moment. It was just another regular season game, but to me, though, that was the “Mama, I made it” moment.

SLAM: Speaking of the Lakers, everyone seems to have an opinion regarding Lonzo Ball and everything he does is documented. What’s something you’ve noticed about him when you’ve played against him?

KT: I don’t ever really judge anyone until I get to know them, but with Lonzo, he’s going to be a great player in this League. He’s already had his second triple-double. I don’t care what anybody says. It’s hard to do in the NBA. I’ve never gotten a triple-double and I’ve been in the NBA for seven years. For him to do that within 15 games is ridiculous. They got a great piece in him, [Brandon] Ingram. They got a young team. I know they’ve been young for a while, but they’ll be good soon. And Magic [Johnson] at the helm? They’ll be good, so I don’t got no worries about the Lakers. They’ll be competing with us very soon.

SLAM: The Warriors, in general, has a brotherhood from top to bottom. How’s that been a key part of the team’s success?

KT: When guys stay ready — you see it through this stretch we’re going through — we’re missing two of our All-Stars and another star in Zaza Pachulia. But we’re still out here getting wins by double digits, so guys are ready to step up and play. Most importantly, guys, when their number’s called, they just want to perform because they’ve been waiting and itching for this time, you know? We get Jordan Bell, JaVale [McGee], Patrick McCaw, Omri Casspi, Andre Iguodala, [Shaun] Livingston — I can go down the list of guys who we can insert into the starting lineup and we don’t miss a beat. We definitely miss our two All-Stars and Zaza — even Nick Young — but our team is ridiculously deep, and we’re able to sustain through rough patches when key guys are out.

SLAM: You’re on a team that’s broken multiple records. Is there any other accolade you’d like to break?

SLAM: If you could give a number, how many championships would you like to have when you retire?

KT: [laughs] You put me on the spot. I want to play ’till I’m 38, 39 years old, and the goal is to win a championship every year. Why else do you play? I got two now, so 15 championships. I want to win one every year, man. You know what I mean? It might not be realistic, but that’s what the goal is. If I could fill up my fam that’d be nice. I just want to get three, though. You can’t look ahead because you start to get in trouble when you start looking ahead.

SLAM: What were some features you liked about Call of Duty: World War II?

KT: Man, I don’t know. It’s pretty basic, but at the same time it has some complex parts about it. The maps — it’s just evolved. I’ve been playing that game since I was, like, 15, so you don’t appreciate it as much as you would ’cause I’ve been playing so many of the versions, but if I went back and played, let’s say, Modern Warfare 2 or the first World War II game, you could see the huge difference. It’s crazy to see how far graphics and technology in the game’s come. It’s just fun playing with all your friends, man, especially when you’re the best one. You always brag on top of the leaderboards and it’s nice.

KT: I would say 8 and a half ’cause there’s some real life professional gamers out there. Nah, I’ll give myself an 8 if I went that far.

SLAM: So do you have a public gamer tag you share with fans or you keep that private?

KT: I’m not going to put that gamer tag out there because my stuff will get flooded so quick, so I gotta keep it lowkey. You might run into me if you can decipher the tag.

SLAM: Who would you say is probably the nicest gamer on the team?

SLAM: CODWWII focuses on brotherhood. It’s obviously a different setting, but how much is brotherhood important to you on and off the court?

KT: It’s huge on the court because we go through a lot. We spend like more than 60 percent of our time every year on the court; off the court, too, we build relationships that’ll last a lifetime especially when you’re competing for championships. That’s really priceless obviously.