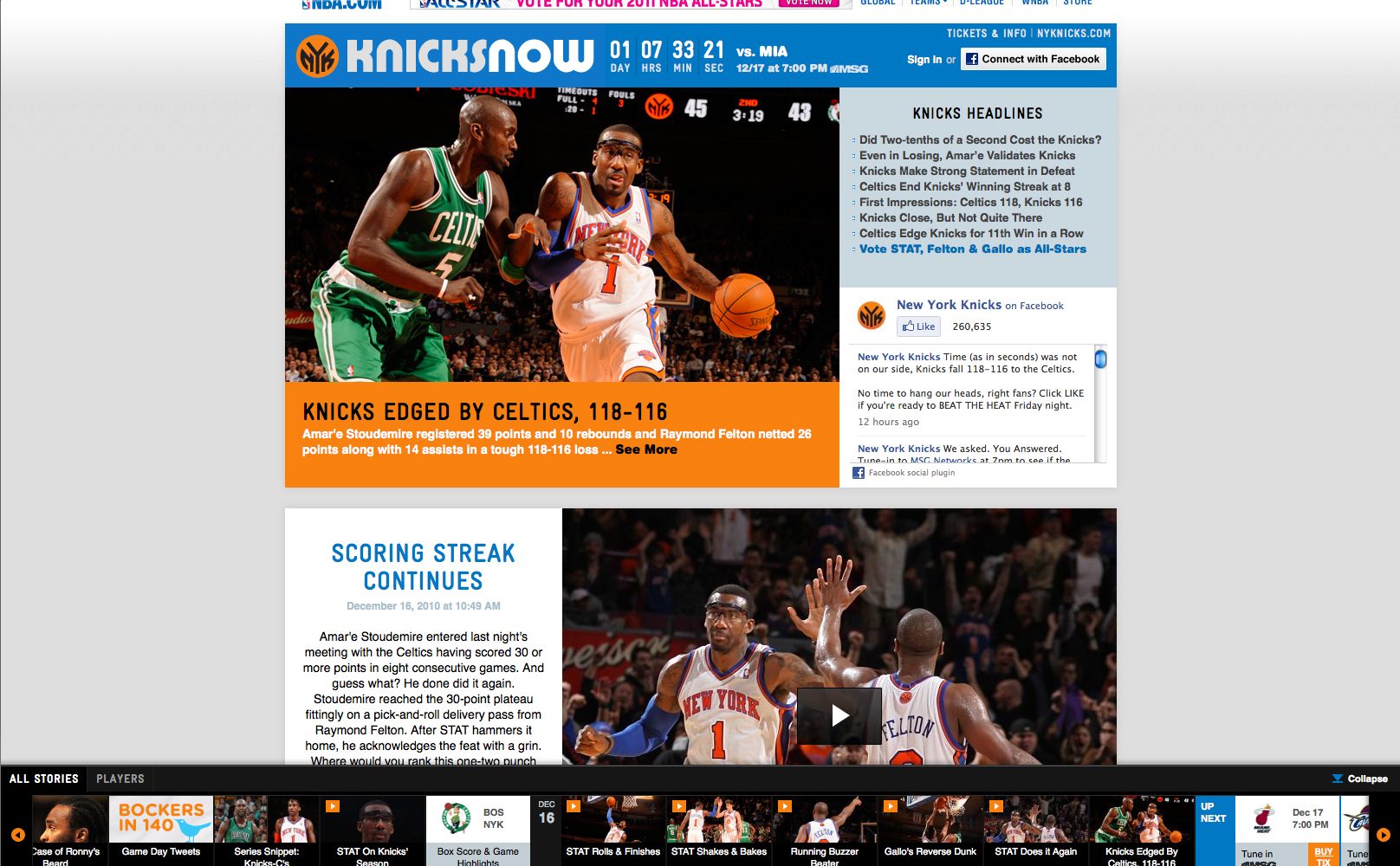 The New York Knicks have turned around their image with their inspired play on the court this season. Now, the 64-year-old franchise will introduce this new era of Knicks basketball by engaging its fans like never before. That yearning to connect with fans has helped create KnicksNow.com, a microsite on the Knicks’ website which the franchise touts as a first-of-its-kind professional sports online community.

The page, which began a gradual launch in October and was officially unveiled last week, uses game highlights, photos, message boards, behind-the-scenes team video clips, Knicks players’ Twitter and Facebook profiles and more to create an online cornucopia of Knicks information. Its purpose is to serve as a daily stop for Knicks fans around the globe.

The site is part of the Knicks’ brand-new “You. Us. We. Now.” campaign, which launched before the season. It came on the heels of an active summer in which the Knicks brought in high-profile free agents Amar’e Stoudemire and Raymond Felton to team with talented, youngsters such as Danilo Gallinari and Wilson Chandler.

The thought process behind the campaign was to introduce fans to a new brand of competitive basketball. So far, so good, as the team looks primed for the playoffs and, as a result, has Knicks fans excited in a way they haven’t been for arguably a decade. The franchise hopes KnicksNow can capitalize on the momentum the team has built since signing Stoudemire in July.

“With the kind of success we had in free agency, we asked ourselves a simple question: ‘What is the future of fan engagement,'” said Howard Jacobs, Executive Vice President of Marketing and Sales for the MSG Sports division of Madison Square Garden, which owns the Knicks. “We recognized there was an emerging dialogue with the fans.”

KnicksNow’s content is built around a series of posts which are updated four times per day. They include the following:

–Knicks Headlines, which always appears at the top of the page and is comprised of all the latest Knicks-related stories on the web.

–The Collection, a photo gallery from each game that typically features celebrities.

–Bockers in 140, which contains one or two tweets at a time from current Knicks on Twitter (there are 10 who have Twitter accounts).

–Click & Roll, a collection of various comments and photos from Knicks blogs and Knicks fans on Twitter.

–In the Paint, in which Knicks superfan and artist Joe Petruccio creates an online painting encompassing the story from each Knicks game.

–This Date in Knicks History, which provides information to key moments, by photo and video, in the Knicks’ history.

And there are plenty more independent sections which bring together fans and Knicks players. Jacobs explained that the information which exists on KnicksNow could have previously been found throughout various Knicks blogs and websites. Yet it “lacked one central, organizing principle,” he explained. “We wanted to bring together the best of the best content…the behind-the-scenes content our fans said they wanted most.”

The site’s development is keyed by the integration of Twitter and Facebook. Visitors can sign into their Facebook profile through KnicksNow’s homepage, which lets them earn points on the site for almost any kind of action — hitting the Facebook ‘Like’ button or Twitter’s ‘Tweet’ button, which is provided on every section; commenting on posts; and communicating with other fans. Visitors can turn in their points for game tickets, Knicks merchandise and what the franchise calls “special opportunities available only to KnicksNow.” The point is to keep fan engagement at a high level.

A visitor perusing the site might find that the content extends only to what’s on the primary page. Yet an expandable bar that runs along the bottom of the site unveils the ability to run through an archived list of stories as well as to visit each player’s site profile. The latter feature highlights the Knicks’ wish to forge communication between their players and their fans.

Take Stoudemire’s profile, for example. A visit to his page brings a clean layout with his picture and Twitter feed along the page’s left side. A site user can follow his feed straight from the profile page as well as view the last four tweets he wrote. (An example Amar’e tweet from Dec. 17: “Meditation. No static. Game day!”) To the right of Stoudemire’s photo is his number, name, position and link to his website. Users can click the Facebook ‘Like’ button just to the right of his position listing, and they can review the archive of Knicks game recaps and Stoudemire’s video interviews and photos that run the length of the page.

Even with each Knicks player having his own profile on KnicksNow, it’s the site’s visitors who remain the focus. “We see it as the fans’ website,” Jacobs said. “It’s the place where fan-to-fan, brand-to-fan really come together and share in something that’s the passion of the New York Knicks.”

Whether visitors utilize the ability to gain points and interact with fellow visitors is another matter. A press release issued by the Knicks states that the team has experienced triple-digit percentage growth in its Facebook page ‘Likes’ and double-digit percentage growth in its Twitter followers in the last six months, which is the same time period in which the “You. Us. We. Now.” campaign was introduced. As of Tuesday afternoon, the Knicks had 46,800-plus Twitter followers and 279,300-plus Facebook ‘Likes’. Only seven NBA teams had more ‘Likes’ and just six had more followers.

Still, there’s no guarantee Knicks fans will want to communicate with one another on KnicksNow. As is the case with many articles, there’s no assurance they’ll comment on a post, in the same way many loyal sports radio listeners never call in to their favorite shows. Fans can enjoy a product without interacting with it to the level that a team might want, for the purposes of its marketing and the marketing of its sponsors.

On that note, the franchise plans on unveiling KnicksNow mobile features in the next couple months. One feature is an application which lets Knicks fans around the country look up bars and restaurants at which fellow Knickerbockers fans are watching a game. It’s Meetup.com meets Yelp.com meets KnicksNow, and the franchise hopes it will enable fans outside New York to feel close to the team without having to live in the Big Apple.

The Knicks won’t be able to truly evaluate the effectiveness of KnicksNow until more time is given for fans to visit the site. In the meantime, the team said it’s open to tweaking the site based on what areas visitors interact with more than others. They’ll show flexibility to cater to what fans are craving, as the team searches for its first playoff berth since the 2003-04 season. It’s evident fan interest in the Knicks is higher than it’s been in recent memory. And now Knicks fans have an opportunity to share the season with each other through an online community dedicated to them.