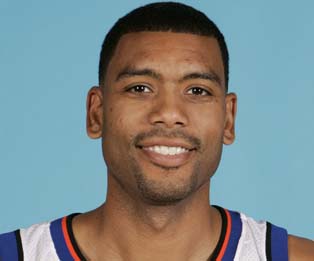 Pouring water on widespread speculation that the Knicks will waive Stephon Marbury, president Donnie Walsh said the controversial point guard will be with the team when it begins official workouts next week.

Walsh also said former Knicks guard Allan Houston will probably join the team at training camp. He said Houston, 37, has been working out with the Knicks at their practice facility and that his shooting touch is as smooth as ever.

Before jumping to conclusions, let’s consider what inviting to Marbury and Houston to camp really means: an smooth end to an era. You thought their chances of going to training camp were small? Imagine their chances of making the team…

Marbury has never been a pass-first point guard, and his history with D’Antoni certainly doesn’t bode well for him. Houston’s knees and D’Antoni’s run-and-gun offense seem like an even more abhorrent match.

The Knicks say they’re building around the capstones of D’Antoini’s system: teamwork and chemistry. Marbury and Houston are going to camp, but Walsh knows they don’t fit into the big picture.