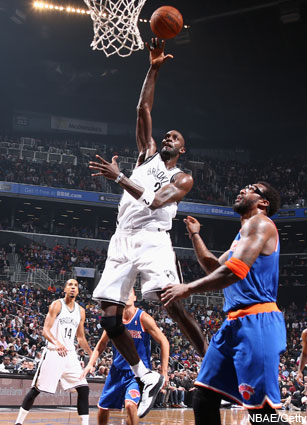 It had been a game that the city, and the League, had been anticipating, one that was going to mark the beginning of a new rivalry between these two certain-to-be Playoff-bound teams and New York City co-tenants. All offseason the Knicks and Nets—and their owners—had been exchanging backchannel barbs and trading pointed quotes. Now they were finally going to get to share a court, on a national stage on Brooklyn’s still embryonic one, where the prowess of New York City basketball was going to be put on display.

Instead you had something that sounded like a bad riddle. Two incompetent franchises, with bungling owners, and mammoth payrolls, and lots of losses, and Shakespearian-inner workings, and no first-round Draft picks on the horizon, walk on to the same court. Who wins?

“It might be easier to answer what’s right with both teams than what’s wrong,” TNT analyst Steve Kerr said to SLAM prior to the Knicks’ 113-83 dismantling of the Nets Thursday night in so-called Battle of the Burroughs, a title that only New York City could bestow upon a matchup between two teams who have both won less than 27 percent of their games.

Of course, not much did go wrong for the Knicks Thursday night. So it has gone for the majority of the teams that have been given the opportunity to face the lifeless Nets this season.

“We finally put a 48-minute game together,” Knicks coach Mike Woodson said, later adding: “The three-ball was falling and the ball was moving and the defense was clicking. That’s how we have to play.”

New York shot 57 percent from the field and 16-27 from beyond the arc. It had 24 assists compared to just 12 turnovers, and held the Nets to under 40 percent shooting. For the first time all season the Knicks resembled the team that won 54 games last year. That the therapeutic Nets, a team that could make the Fort Wayne Mad Ants look imposing, was needed to produce such a result is revealing of just how far Melo’s bunch have fallen.

“I think it’s a flawed roster,” Kerr said of the Knicks. “I thought last year it all made sense. You had backup bigs, spacing, ball movement, three-point shooting. This year the ball sticks constantly and you don’t have any of that.”

It was Jason Kidd who brought many of these elements to the Knicks last season, who instilled these principles in the team and set the standard for how they were going to play. Now he’s in Brooklyn, no longer the nominal coach on the court but now an actual one on the bench where the goals remain the same but finding ways to accomplish them takes an entirely different set of skills—skills that, at the moment, it doesn’t appears as if Kidd has.

“It’s been a combination of injuries, a lack of experience together, a lack of experience for Jason and his staff, and a lack of energy,” Kerr said of the Nets struggles, adding: “They’ve got an older, sort of plodding team. If you’re methodical by nature then you better be efficient and sharp in your execution, and they’re just not.”

What they are is bad. Really bad. Bad enough to, at times like Thursday night, make the Knicks’ future look a bit less bleak, their atmosphere a bit less circus like.

It’s been more than 40 years since the Knicks last one a title, and that number doesn’t do the franchises’ ineptitude justice. There has been a revolving door of coaches and decision makers and so-called franchise saviors. Puzzling reassignments and demotions. A constant win-now philosophy that has turned every New York team into a house of cards where one removed piece brings the whole thing down.

And now the Nets appear to be headed down that same path.

If only Brooklyn had pulled a George Costanza, done the opposite of the Knicks, it could eventually morphed into the team that Mikhail Prokhorov so desperately wanted it to be. Had the Nets started with the foundation, built slowly and methodically and with patience, they could have offered New York City something it didn’t have. Instead, the Nets let their desire to compete with the Knicks turn them into a carbon copy of them. From the roster full of overpaid old guys, to the brash owner, to the coaching carousel, Brooklyn has become the team it always wanted to overtake.

“I think you get evaluated by being whole,” Kidd said after the loss. “It starts there. Once that occurs, then you’re evaluated. And that’s as simple as it gets.”

The problem: Teams constructed like this don’t ever become whole and now both of New York City’s basketball teams are stuck in the mud. No where to go but down, no hope of getting out. Thursday night’s aptly named “Toilet Bowl” wasn’t an anomaly; it was foretelling. This is where the Battle of the Burroughs is heading. From here on out, things are only going to be getting worse.