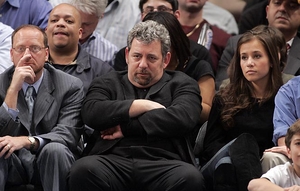 With the exception of the most fanatical of New York Knicks supporters (and the immortal JR Smith), it seems that the only person who expects the team to walk away with the Larry O’Brien trophy this season, is the guy who signs everyone’s paycheck.

Per the NY Daily News and ESPN:

When James Dolan sat down with the coaching staff earlier this month, his message to the group was plain and simple, and yes, somewhat unrealistic. “He said he believes the team is good enough to win a championship,” says a person with knowledge of the meeting. “That’s what he thinks.”

“He told them he believes they have enough talent to win it all,” one source said, “and he expects it to happen this year.” […] “A few people were a bit surprised, taken aback. But he’s the owner. He has a right to expect it,” one source said.

Head coach Mike Woodson continues to say the Knicks are good enough to be in the hunt for the NBA title, and newly hired GM Steve Mills wouldn’t confirm or deny that Dolan delivered the championship-or-else edict.

New York won 54 games last season and grabbed the second Playoff seed in the East, before flaming out in the postseason. While many of their top rivals in the conference improved over the summer, the Knicks were hamstrung by the salary cap and don’t appear poised to bring an end to their 40-year championship drought.

As usual, James Dolan’s demands and expectations are completely out of touch with the reality facing his team.