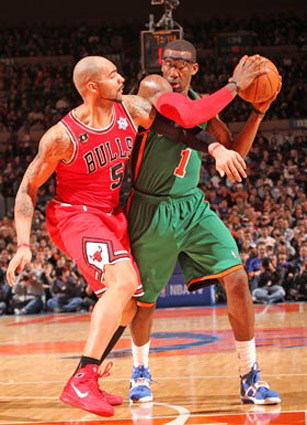 Being Jewish on Christmas, the best parts of the day have customarily revolved around watching basketball, eating Chinese food, and maybe catching a movie. It’s the ultimate “do nothing” day for a variety of reasons and over the years I’ve gotten terribly used to this occasion that takes place.

In a change of pace, this year I was lucky enough to score a media pass to the Bulls–Knicks game at MSG. I didn’t have to sit at home all day and I can honestly say that this was the most exciting Christmas that I’ve ever had—there was  something important/fun to wake up for and be absolutely thrilled about, as I haven’t been to the Garden for a meaningful game since… well… it’s been a while.

As I heard a few other reporters bickering about covering the game (very understandable), I thought about how fortunate  I was to be able to take in a competitive game on Christmas—especially between such storied rivals as the Knicks and Bulls, who’s history in the 90’s was heated, despite the Bulls normally walking away with a W.

Entering the game at 17-12, it wouldn’t be a stretch to say that the Knicks franchise is playing their most inspiring basketball in a decade. It was at this point in the 2000-01 season—the last time that there was a real sense that New York could potentially be a threat in postseason play—that a run of seven straight (the longest winning streak of that season) began and propelled the Knicks to a 48-34 record.

Now I’m not saying that the Knicks are definitely headed for that type of season; it’s simply too early to judge that and the team still has areas that can be improved upon.

The passion exhibited at the Garden on Christmas Day gave Knicks fans yet another reason to believe in their team this season.

The crowd congregated on this spirited day—highlighted by the Knicks festive green jerseys—to see if the team could deliver a victory that signified a real reason to hope. The past two weeks have been a see-saw of emotion for New York, as they followed up their nine-game win streak against lukewarm competition with three straight losses, two of which came at the hands of upper echelon Eastern Conference foes Boston and Miami—whom everybody in the East is currently chasing.

“We beat a good team today,” said Felton, who contributed 20 points, 12 assists. “They are a very good team, one of the best teams in the East. They have a great team, are well-coached… it was a big win for us.”

After the losses, this game against the Bulls was the perfect barometer test to see just how far the Knicks have come this year. They certainly didn’t have their way with the Bulls, but NY showed plenty of cajones in mustering up a win against the current third seed in the East—even if Joakim Noah was on the sidelines.

“You have to beat these teams, especially at home,” Knicks Coach Mike D’Antoni said. “It’s good to bounce back after the three we lost in a row, that it wasn’t a fluke that we had won a few in a row.

It was a feel good game for sure.”

So as the Knicks set out to conquer territories that have been uncharted in recent campaigns, they figure to do so with a stream of steady confidence and swagger combined with a willingness to keep working and getting better. As it stands right now, they are in the sixth spot in the conference.

With continued growth, they look as if they may be poised to make a run towards the top half of the conference.

–      Today the Knicks took a page out of the 90’s and made a concerted effort on the defensive end of the floor, where they coaxed 20 turnovers out of a Chicago team that is in dire need of a second ball-handler, and held the Bulls scoreless during a crucial 8+ minute stretch in the fourth quarter, from the 10:10 mark until there were just under 2 minutes to go. The Knicks emphasis were on getting back in transition, making Carlos Boozer (26 points, 19 rebounds, 7 turnovers) work with difficult angles and multiple bodies in the post, funneling Derrick Rose (25 points, 8 assists, 7 rebounds) into help defense, and  keenly maneuvering to keep an eye on Luol Deng and Kyle Korver coming off of pin-down screens. With these strategies in mind, they held the Bulls to 44 percent from the field, had 10 blocks (Amar’e had 6) and applied pressure to Derrick Rose in all the right spots, forcing him into 7 turnovers—most of which were a result of insufficient motion in the Bulls offense.

– The hustle plays that the Knicks made were highly impressive at times. From Landry Fields fantastic follow-up–where he rushed into the lane on a Ronny Turiaf missed free throw, contorted to the other side of the rim, scored the basket, and got fouled– to the excellent rotations shown during the 8+ minute stop-session, the Knicks are proving that they understand what it takes to win a ball game and are willing to carry out their game plan on the court, which is a fundamental step towards building a successful franchise.

– They were on fire from three and beat the Bulls with a full team effort. Toney Douglas, Shawne Williams, Danilo Gallinari, Landry Fields, and Raymond Felton each hit at least two triples and propelled the Knicks to a 12-22 afternoon from deep, a better clip than the Bulls 11-20 night at the charity stripe. And sure, Amar’e did his part scoring 20 points and grabbing 10 rebounds. It is important for the Knicks to continue to win without relying on their multidimensional power forward too heavily. The high percentages that resulted from making the extra pass led to a balanced offensive attack—an essential ingredient for this team to be successful.

– The Knicks got outworked on the boards at the offensive end, which resulted in being out-rebounded by the count of 17-6, and the second chance opportunities added up quickly for the Bulls. The main reason that Chicago led by the slim margin of 54-52 at the half was primarily the result of a 13 shot advantage (52-39) and a 12-2 offensive rebound differential. So despite shooting just 44 percent from the field, Chicago was able to stay afloat with second chance points around the rim. For NY to emerge this season they will have to close defensive possessions out with a rebound (they have had trouble with this all season) with the same fervor with which they are knocking down their threes, as it is vital for starting the fast break and saving much needed energy.

–       I don’t want to say the ball movement was ugly for the Knicks, because at times it was fantastic. Landry Fields made some great drive-and-kick plays, Felton and Amar’e worked the pick-and-roll to perfection at times, Wilson swung the ball quickly, and there seemed to be a rather unselfish, all for the team attitude on display. The Knicks passing and ball-handling was both disrupted by a Bulls defense that emphasized “Not only covering the line, but taking care of the pick-and-roll—the ball, the paint—and then closing out hard to the line,” which was emphasized as being an especially difficult task by Coach Tom Thibodeau because the Knicks space the floor with their shooters and play “unselfishly” and were simply the result of too much rushing, which proves at times to be the one of the more dangerous aspects of mind frame the Knicks play with. Even with the aforementioned unselfish roots, the Knicks still struggled to make correct decisions, both in transition and in the half court. Stoudemire had 7 turnovers while Felton and Gallo gave away a nickel each (though Felton somewhat cancelled his portion out with his 5 steals).

-Landry Fields on his amazing putback: “This year a couple of times, I ran in there, but the person shooting made the free throw,” Fields said. “Before this one, I turned to Toney Douglas and said, ‘Toney, I’m going to get this one.’

“It happened to come off perfect and went right into my hands. The rest is history. I was sprinting in and nobody was going to box me out. I got a full run to the rim. Hopefully, I get a little luck with the bounce, and I did.”