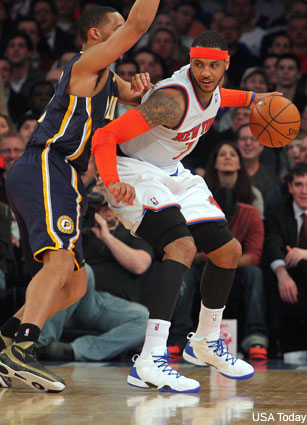 The 76ers might be on their way to the longest losing streak in NBA history, but that doesn’t mean they’ve quit on the season. Philadelphia proved to be a handful for the Bulls, pushing Chicago until the game’s final seconds. The Bulls were led by another renaissance performance by Joakim Noah, who finished with 14 points, 10 rebounds, 6 assists and 4 blocks, including a nifty coast-to-coast drive:

D.J. Augustin dropped 20 off the bench for Chicago, while Taj Gibson had 19 points and 13 rebounds as he pads his case for Sixth Man of the Year. The Bulls did have some difficulties with the Sixers’ hustle, turning the ball over 15 times.

Philly hung around thanks to some hot shooting by Byron Mullens (12 points, 2-3 from 3-point range) and Tony Wroten (17 points, 4-6 from deep, 7 assists, 6 rebounds) in the second half. Thad Young paced the Sixers with 24 points and Michael Carter-Williams posted 17 points, 9 rebounds and 7 assists.

With LeBron James in a suit on the bench, the struggling Celtics stole a win from the Heat. Rajon Rondo (9 points, 10 rebounds, 15 assists) didn’t shoot much but dropped in two very Rondo floaters in the final minutes to boost Boston to the win. Avery Bradley sank a career-high 6 3-pointers for the C’s, finishing with 23 points on the night.

Playing without their leader, Dwyane Wade (17 points) and Chris Bosh (6 points, 11 rebounds) both struggled, combining to shoot just 10-28 from the field. The Heat were buoyed by 16 points off the bench from Chris Andersen, while Erik Spolestra dusted off Udonis Haslem for a rare start. The vet delivered with 14 points on 7-8 shooting, but poor 3-point shooting (4-17 from behind the long line) helped doom Miami.

Brooklyn survived a close call against Charlotte, nailing down a close win when Deron Williams (25 points, 8 assists) drilled a mid-range jumper with under a minute to go. D-Will is having his best month of the season in March, averaging over 16 a game as the Playoffs draw nearer. Joe Johnson pitched in 20 and 8 boards, while Shaun Livingston dropped 17 for the Nets.

After the Bobcats clawed their way out of a double-digit hole in the first half, the two teams played each other tight throughout the final quarter. Gary Neal (17 points) and Gerald Henderson (13 points) both hit crucial 3s for Charlotte, but they couldn’t hang on for the win after taking a lead early in the fourth. Al Jefferson posted 18 points and 12 rebounds to lead the ‘Cats.

The Grizzlies nearly let this one slip away, but managed to rally after blowing their game-long lead to pull away down the stretch. Memphis never trailed, but allowed Utah to tie it up at 84 with less than six minutes to go in the fourth. The Grizz finished the game on a 12-2 run, with Mike Conley (18 points, 7 assists) scoring half the points in the closing push. Zach Randolph led Memphis with 21 points and 11 rebounds, while Marc Gasol nearly matched him with 20 and 10 of his own, also blocking 4 shots.

The Jazz rode back into the game on the backs of Gordon Hayward and Alec Burks (16 points each), but ran out of gas and went scoreless over the final 3:45 of the game. Trey Burke scored another 16 points while handing out 6 assists, while Enes Kanter had 12 points and 12 rebounds.

Toronto came back from a big first-half deficit and rallied in the final minutes, sneaking past their hosts in New Orleans. DeMar DeRozan led the way with 31 points, while Grievis Vasquez victimized his former team by scoring 6 of his 14 points in the final two minutes of the game. The Raptors used a 9-0 to take the lead in the fourth, hanging on for the win. Kyle Lowry put up 23 points and 8 rebounds for Toronto, while Amir Johnson dropped in 17.

Playing without Anthony Davis, the Pelicans gave the Atlantic division leaders a good fight. Al-Farouq Aminu led the Pellies with 19 points and 10 rebounds, while Tyreke Evans went for 18 points. Eric Gordon put in 15 for New Orleans, all in the first half.

Phil Jackson’s tenure in New York is off to a good start after the Knicks smothered the Pacers at Madison Square Garden. Carmelo Anthony put up 34 points to lead New York to a seventh straight win as they hunt the 8-seed in the East.

The Knicks got out to a 16-point lead early in the third and managed to hold the Pacers off as they made a late charge. Amar’e Stoudemire scored an efficient 21 points (8-15 shooting) and Tyson Chandler (7 points) pulled down 14 rebounds and helped control the paint. Knicks fans also gave Jackson what might be the first mid-game standing ovation for a team executive in League history:

Indiana hit just 42.5 percent from the field against a usually awful Knicks defense, with their struggles highlighted when you look at Paul George’s line. After starting the season as an MVP candidate, George has tailed off big time. He scored 17 points against the Knicks, shooting 4-17, turning the ball over 4 times and racking up 5 fouls. Lance Stephenson had 21 points and 9 boards for Indy, while Roy Hibbert put up 20 points on 8-10 shooting. Unfortunately, no one else seemed willing to hit a shot for the Pacers, who had their four-game winning streak snapped.

Kevin Love hit a clutch leaning flip shot to give Minnesota a win in the final seconds of overtime, as the Timberwolves were able to withstand a massive rally by the Mavericks. Love finished with 35 points and 8 rebounds for the Wolves, while Ricky Rubio posted his second triple double of the season with 22 points (8-12 shooting), 10 rebounds and 15 assists, tacking on 4 steals for good measure.

Monta Ellis (22 points, 4-6 from long range) had it all as he dragged the Mavs back into the game, scoring Dallas’ final 12 points in regulation on three triples and an and-one bucket to force OT. In the extra period, Dirk Nowitzki (27 points) rumbled back to life after going nearly 24 minutes of game time without a field goal to score 6 in OT, including a jumper in Love’s eye with 33 seconds on the clock to give the Mavericks the lead. Dirk got a look to win it after Love’s go-ahead hoop, but the T-Wolves’ All Star contested the shot and the ball drew back iron. With the Grizzlies’ win earlier in the night, the Mavs fell into a virtual tie with Memphis at the bottom of the Playoff picture in the West.

Aaron Brooks was the next man up when Ty Lawson, suffering from a sinus infection, couldn’t go on Wednesday, and he sure was ready. Brooks had a night to remember, scoring a season-high 27 points and handing out a career-best 17 assists, leading Denver past Detroit. The diminutive point guard set up guys like Randy Foye (22 points, 5 made triples) and Kenneth Faried (15 points) as the Nugs ran the Pistons out of the gym, shooting over 51 percent on the night. While they’re pretty much done in the Playoff race, Denver has won four of its last five.

Greg Monroe had 22 points to lead Detroit. The Pistons were ahead for much of the game until a Brooks- and Foye-led flurry pushed the Nuggets into the lead early in the fourth. Andre Drummond sat this one out with a neck injury, as the Pistons sink low enough in the standings to keep their first round pick.

The Suns got hot in a flash and blew open a close game, dismissing the Magic with a fourth-quarter outburst. Goran Dragic scored 18 points on 8-13 shooting and Gerald Green (14 points) hit three triples early in the fourth quarter to help lead what turned into a rout. Markieff Morris contributed 12 points off the bench, while Miles Plumlee had 10 points and 9 rebounds. The Suns moved back within 1.5 games of the 8-seed in the West with Dallas’ loss.

Tobias Harris had 23 points and 9 rebounds to pace the Magic, who lost center Nikola Vucevic when the big man picked up two quick technicals in the first half. Arron Afflalo added 20 points (6-10 shooting) and Victor Oladipo had 14 points and 9 assists for the League’s worst road team, as the Magic now stand at 4-32 away from the Amway Center.

It took some effort for the Spurs to pick up their 11th straight victory, as Tony Parker admitted after the game, but San Antonio eventually sent Lakers fans home unhappy as they pulled away in the fourth quarter. Parker had 25 points to lead the Spurs, while Kawhi Leonard (22 points, 10 rebounds) and Tim Duncan (12 points, 16 rebounds, 6 assists) both registered double doubles for the streaking Spurs.

Gregg Popovich wasn’t happy about his team’s defense after the game, but San Antonio ended up holding the Lakers under 43 percent shooting on the night. Xavier Henry came off the bench to score 24, 19 of them in a competitive first half, as the Lakers trailed by just a point at the half. Pau Gasol had 22 points, 10 rebounds and 6 assists for the woeful Lakers, who have nothing to lose but more basketball games at this point.