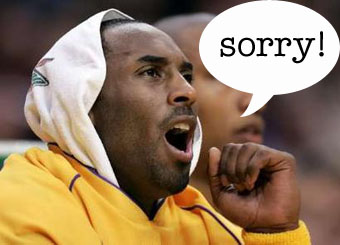 This was going to be much more than a simple game recap. I was going to combine my notes from last night’s game with my notes from the weekend—which I spent in L.A., courtesy of our friends at Nike, checking out the new Zoom Kobe II and watching the Lakers lose to the Spurs.

However, in the interest of getting SOMETHING posted before everyone leaves work for the day, I figured I’d deal with last night’s game first. OK?

Late arrivals for the game tonight include me. I had some computer issues at home, and don’t arrive at the press entrance until after 6:30 (locker rooms open to the press at 6 p.m. and close at 6:45). And while this ensures me of not getting any time with anyone, it DOES provide me with good elevator company—Spike Lee and former NBA point-forward Paul Pressey. Another media type asks Spike if he plans on leaving at halftime since Kobe isn’t playing. Spike just stares at him. “When do I ever leave early? When do I ever even leave right after the game ends?” He’s got a point. Pressey, who I believe is scouting for the Celtics, is way more dressed-down than he ever was as a coach: baggy sweater and jeans. I mention to Lang and Ben that he’s dressing awfully young, and they just look at me pointedly. They’ve got a point.

Locker rooms (and the entrance to the court) is on 5, press room is on 6. Since I’m short on time and want to stop by the court, at least, I get off at 5 with Spike. As I turn the corner to the tunnel, I come face to face with Shammond Williams—the one Laker I would have wanted to see anyway. We exchange pounds, he heads to the locker room and I stop by the court. Where nothing special’s happening anyway.

FOOD REPORT: Salad’s solid. Other than that, it’s the usual unidentifiable mix of Italian slop. Lasagna, vegetatarian lasagna (I think) and something Parmesan. I’ve seen this movie plenty of times before. C.

Before we head out to our seats (Lang and I are way up in the upper pressbox, Ben’s in the more desireable Gate 64 box), we check the starting lineups. For the Lakers, it’s Smush Parker, Sasha Vujacic, Vladimir Radmanovic, Lamar Odom and Andrew Bynum. Great!

Introductions. After the Laker starters are introduced, it’s mentioned that Kobe isn’t with the team due to an NBA suspension. This does not go over well. Considering that people bought tickets to this game months in advance JUST to see Kobe, yeah, it’s understandable. Better luck next year, folks.

The Knicks take an early lead, 7-5. Smush Parker has the Lakers first five points. Oh wait, there’s another three. Make that eight. In the first four minutes. Who needs Kobe anyway? Starbury keeps pace with five of his own.

Jared Jeffries gets an and 1, leaves the 1.

David Lee checks in at the 6:06 mark to much cheering and applause. Apparently Isiah Thomas is the only person in the entire Tri-State area who doesn’t think he should start. Which sucks for Lee because, you know, he’s the one who makes the lineups.

Speaking of lineups, I read yesterday that Don Nelson has used 25 different starting lineups so far this season. Who does he think he is, Larry Brown?

This is unsubstantiated, but it’s believed that the real reason Kobe got suspended is because he killed Barbaro.

At 3:44, Andrew Bynum hits a free throw. This ruins my dream of Smush Parker scoring every single Laker point. Curses! At least the Bynum Brigade is happy. Holla! (Hey, I need a t-shirt, too. Do you guys make mediums?). He misses the second, but makes up for it by dunking the ensuing Smush miss.

That Bynum Brigade shirt got me thinking, actually. What other skate graphics can be adapted to basketball? There’s gotta be something with Tony Hawk and the Atlanta variety brewing.

Uh-oh. Andrew picks up his third foul with 2:35 to go in the first. Someone might want to wake up Phil Jackson and let him know. OK? Thanks. Knicks lead, 22-14.

Kobe gets a blow here—well, for the whole night actually. THANKS AGAIN, STU. Jerk. Eve’s here, though, and that makes everything better. She seems to have borrowed Tyra’s forehead for the night.

David Lee has six rebounds already. I think he had three before he even checked in.

Eddy Curry—I’m sorry, E-City—is doing pretty much whatever he wants inside. He’s got 15 and six with plenty of time left in the half. If he’s not careful, he might even get double-digit rebound. Hopefully someone warns him at the half. Oh yeah, and the Knicks are somehow back up 40-32. I didn’t really keep track of specifics.

And on the baseline, it’s Kareem Abdul-Jabbar! He’s doing an interview with channel 9 when they show him, and he seems to be wearing a tan baseball cap with his number 33 on it. I also think he’s holding a copy of his latest book, and when he stands to acknowledge the applause (which in turn becomes a standing O), he ALMOST holds it up. But doesn’t. Good thinkin’ Cap. And just before it gets too emotional, some leather-lunged bastard behind us yells “SMOKE SOME WEED!” Moment over.

The Knicks are cognizant that this game might be getting away from the Lakers, so they politely commit two straight turnovers. And Malik Rose picks up his third foul. I don’t remember when he got the first two. And I don’t even know a Mark.

This is how polite the Knicks are: There’s a tie-up, and Jeffries wins the tip. But he taps it to Rad, who forwards it to Turiaf for an emphatic dunk. Turiaf, energized by this, blocks Curry so bad on the next trip down the floor that he (E-City) falls on his face and doesn’t get up. Kobe’ll probably get another game for that. Rad hits a corner jumper, and Jeffries comes back down and hits a three. Knicks up 43-41 at the half.

Channing Frye hits the first two baskets of the second half. And that’s all I’ll be typing about him today.

Here’s how notes can be funny sometimes. I note that Lamar Odom hits a three to make it 53-51 with 8:08 to go. I do NOT note: Anything that happened in the prior three minutes, or who’s winning. Go me.

Jared Jeffries dishes a behind the back pass to E-City, then draws a charge on Rad. Admittedly, Rad’s drive was so bad that Jabba The Hutt probably could have beat him to the spot, but this is unquestionably Jeffries’s best game as a Knick. Um, not that it’s saying much.

Vujacic scores on a driving layup. People wonder who he is and where he came from and why he’s not Kobe Bryant.

Jeffries travels, and then ties up Rad.

Jamal Crawford will apparently be making an appearance at Build-A-Bear.

Lamar Odom ties the game at 57 with a trey, Steph unties it with his own trey, and no one bothers to get within 10 feet of Rad under the basket as he scores the easiest two points he’ll ever score in his life. Assist to Lamar, who has 18, nine and four.

Jared Jeffries comes in baseline and dunks back a Curry miss. Someone’s gonna have to keep Isiah from giving him a max extension or something. David Lee’s never going to start if this keeps up. Although maybe then people will start talking about him for the Sixth Man award.

Shammond Williams checks in for the final 6.2 seconds of the third quarter. And all that happens in that time is that the Knicks bring the ball up and Steph sticks a 30-foot jumper at the buzzer. Knicks lead, 73-64.

Up on the scoreboard, the Knicks promote the eighth annual “Knicks Bowl,” a charity event where one can actually bowl with the Knicks. More importantly, the logo includes an abbreviation for the event—KB8. Thanks. You’re killing us. Really.

Jamal Crawford makes some ridiculously crazy move down the lane for a layup that looks impossible. Because it is—he travels AND carries.

Three-point game with 6:52 to go after threes from Rad and Cook.

E-City catches it in deep, gets tied up/blocked by Turiaf. Jump ball.

Steph hits a three with a hand in his face, and Farmar matches him.

A couple Lamar free throws cut the lead to 1, but Jeffries comes back with another three-point play.

The Jamal Crawford Offense takes over from here. Because it’s easier to give Jamal the ball every time and hope something good happens rather than, I don’t know, have some sort of an offensive gameplan. On defense, the Knicks—well, they don’t do that sort of thing. Rad, open three, money. 96-94 Lakers with under a minute to go.

OK, Knicks up four with 20.2 seconds to go, and the strangest thing happens. Crawford is bringing the ball up, and he either falls or is pushed out of bounds. With the ball. I think he thought he was calling time, but the refs either don’t know or don’t care. Turnover.

Lamar finishes with 25, nine and six. Curry has 27 and (whew!) nine. Smush goes 4-7 in the first quarter, and 1-7 the rest of the way. All five Knick starters are in double figures. Renaldo Balkman plays 6:11 and I don’t even notice.

Nothing of major importance. Lang and or Ben can fill you in.