Kobe Bryant Shut Down for the Season (UPDATE) 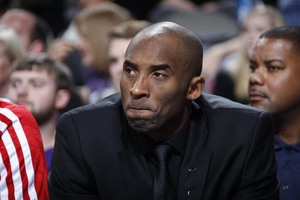 UPDATE: The Lakers made it official Wednesday afternoon, declaring that Kobe Bryant’s season has come to an end. From the press release:

“With Kobe’s injury still not healed, the amount of time he’d need to rehab and be ready to play, and the amount of time remaining in the season, we’ve simply run out of time for him to return,” said Athletic Trainer Gary Vitti. “However, Kobe will have the entire offseason to heal, rehab and prepare, and we look forward to him being 100% for the start of next season.”

“Obviously this has been a frustrating and disappointing season, but I appreciate all the support I’ve received from the Lakers and the fans, and look forward to being back and ready for the start of training camp,” said Bryant.

The Los Angeles Lakers will re-examine Kobe Bryant’s fractured left knee this Friday, but his fate may already have been determined.

The team will reportedly shut the superstar guard down for the remainder of the season.

Bryant is frustrated by the slow recovery, to say nothing of his team’s disastrous year, and has already begun plotting his revenge for the very near future.

The Los Angeles Lakers are expected to declare Bryant out for the rest of the 2013-14 season later this week, according to team sources. Bryant is not accompanying the team on its trip to Oklahoma City and San Antonio, staying back to be reexamined by team doctor Steve Lombardo. And considering where Bryant’s level of discomfort remains with the fractured lateral tibial plateau in his left knee, barring an unforeseen change, the team will finalize the decision that Bryant will not play again this season.

Although the Lakers’ original estimate was that Bryant would miss approximately six weeks, he is now expected to miss the final 17 weeks of the season. He said at the All-Star break he was frustrated by the slow recovery with his knee and noted, “It’s not the mind that wears down, it’s the body.”

Shelving Kobe until next season is the sensible and obvious route to take, even if he may not necessarily agree. The Lakers will do what they can to reload this summer, though it’s more likely they’ll try to hit a free agency homerun in 2015.

Kobe Bryant turns 36 in August, and signed a controversial two-year, $48.5 million extension in November that will keep him as the NBA’s highest paid player. The Los Angeles Lakers are 22-42 and headed for the lottery.