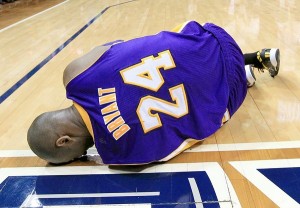 Kobe Bryant went down in a heap late in the game last night, as the Los Angeles Lakers lost 96-92 to the Atlanta Hawks. He’s now listed as being out indefinitely with a severe left ankle sprain, and Kobe is one unhappy fella.

According to Bryant, Dahntay Jones made a dirty and dangerous play as he defended him late in the fourth quarter — comparing it to Jalen Rose’s infamous and successful attempt to injure him back in the 2000 NBA Finals — and he’d like for referees to start doing a better job of protecting jump shooters.

“You can contest shots, but you can’t walk underneath players, that’s dangerous for the shooter … I’m always conscious of it. When I go to contest shots I’m always very conscious about making sure I don’t walk underneath them. It’s just a very, very dangerous play. Especially if I’m fading away, there’s no rhyme or reason why I should come down anywhere near somebody’s foot.”

Dahntay Jones defended himself on Twitter, and added that he has the utmost respect for the Lakers superstar.

Kobe Bryant’s wife, Vanessa, posted an image of the X-Ray on her husband’s swollen ankle. There’s no telling when he’ll return to game action, as the Lakers cling on to the 8th Playoff seed.

Naturally, Kobe Bryant’s thoughts turned to vengeance when discussing the injury with reporters: “I can’t get my mind past the fact that I got to wait a year to get revenge.”