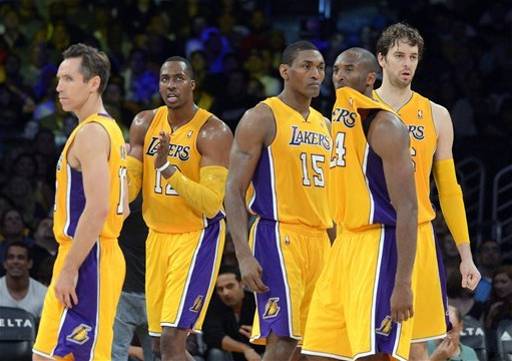 With a dramatically revamped roster, the adoption of a new offensive system and hit with injuries, it’s not inconceivable that the Los Angeles Lakers would be 0-2 to start the season.

Naturally, this being the NBA’s glamour team, playing in an enormous media market (serving a massive fan base), there’s widespread panic and irrationality in Laker-land.

Kobe Bryant, more frustrated than anyone about his squad’s disappointing performance this early on, wants everyone to calm down.

Bryant doesn’t ask nicely, because that’s not what he does. In fact, he calls panicky fans “stupid”, which is very Kobe-esque.

Kobe: “Offensively, it hasn’t looked as pretty as it will be, but we’re scoring a lot of points efficiently. That’s not where we’re hanging our hats on right now in in terms of how we’re losing games. We’re not executing defensively, which has a lot to do with guys being on the same page and working together.” Q: On if he’s surprised at how the team has started: Kobe: “I’m always surprised when I lose, but at the same time, it’s pretty entertaining to me. Nobody wants to win here more than I do. Nobody, nobody. I’m not panicking or jumping off a bridge because we’re 0-2. It is a process, but we have to approach the process with a sense of urgency. Just because we have this talented roster, we want it to happen. But we have to push for it to happen.”

Q: On the critics asking for Mike Brown to abandon the Princeton offense: Kobe: “I don’t understand. (The city) has seen us win multiple championships here, playing an offense that is tough to learn, that had a sequence of options and took five guys being on the same page working together. They know how that stuff works, so for them to be so stupid now and say: ‘Well, let Steve (Nash) dribble the ball around and create opportunities for everybody, let Dwight (Howard) post up or let me (isolate) … it’s not idiotic but it’s close.” […] Q: On his response to people criticizing Mike Brown: Kobe: “I can say it because I’ve won. It might be tough for (Mike Brown) to say it, but I’ll say it for him: ‘Everybody, shut up.’ Let us work and at the end of the day, you’ll be happy with the results like they normally are.”

It’s going to take time for the Lakers to get jell, get healthy, and figure things out on both ends of the floor – Dwight Howard said so prior to the season opener. Just don’t expect their fans and the media to suddenly become patient during the process, no matter how often Kobe asks them to shut their mouths.