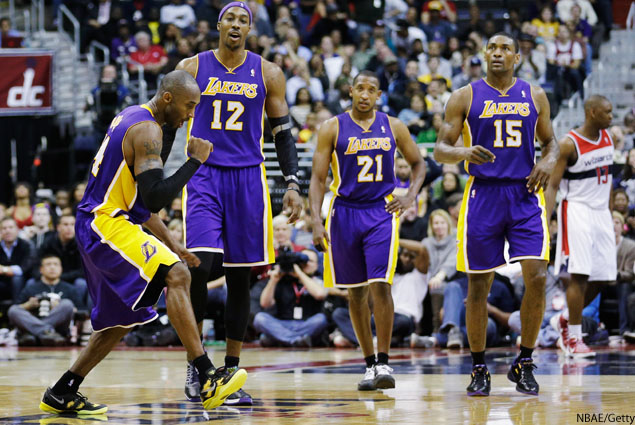 God, this is painful.

Math can’t keep up with how badly Kobe Bryant wants to win this Knicks game. L.A. is down 10. Kobe’s been digging around the attic for 46 minutes and has just found a respirator the Lakers are willing to stuff up their noses.

He’s just hit a step-back three over a couple of people. He was falling out of bounds.

Kobe is a gorgeous, pristine yacht and the Lakers are trying to drive him up Fifth Avenue. It is painful because Kobe is a yacht, still. Not a dinghy. Not a 34-year-old antique, as projected. And his teammates are anchors or cannonballs or ankle weights or pains in the ass or, overall, useless tonight, nautical or not.

You know those monks who get really good at life and realize that life isn’t as fair and compassionate as they are? There are seemingly two options from there: End up on fire in a public square or get even quieter.

I’m not calling Kobe Bryant a monk. That’s not what I’m doing. I’m just asking you to think about it.

Who is the person that makes Kobe get up so ridiculously early in the morning all these days? Who signs up for that internship from hell?

“He does,” Grover says. “He gets me up. He puts that on himself. Those are his hours. Great players just find the time.”

It’s two weeks before that Knicks game. Kobe’s at the top of the AT&T Center in Los Angeles showing off his new shoe. It takes two elevators to get up here. He arrived by helicopter.

He admits that right now, at 34, he’s playing some of the best basketball of his life.

“I don’t really have an explanation for it,” he says. “I don’t know where it’s coming from.”

Did he feel it? Did he know he got his step back?

“Oh, for sure,” Kobe says. “I don’t know where it’s coming from. I’ve been striking at light speed like I used to. I can’t explain it. Maybe we’ll have to use E=mc2 to explain it. But it’s there.”

Bryant is having a phenomenal offensive season by any scoring metric. At press time, he’s leading the League in scoring. He’s shooting at the highest clip of his career. He’s passing the stats test. He’s passing the eye test. It doesn’t matter. He has never looked better and the Lakers, in the Kobe Era, have never looked worse.

You can pin all of this on the helicopter, the disconnect, but that wouldn’t be right. You can’t fault a player for wanting all of his teammates to play like they deserve a helicopter.

Well, you can, but you’d probably be wrong.

Tomorrow night against the Nuggets, things will click. The Lakers will win. Kobe will take a backseat to see the team around him. He’ll only take 17 percent of his team’s shots and he’ll pretend to play point guard. It’ll work, temporarily, then they’ll win one more game in the next three weeks and no one will be able to explain it.

There’s a story going around right now. It’s true, and it’s on a women’s website called xojane.com. If Kobe has ever been there, I will eat the eighth edition of his shoe. The story’s about a set of parents who adopted a teenage murderer. It’s written by the parents’ blood daughter. In it, that daughter says she had “developed an excellent false smile” when she was forced to talk about how awesome her newfound life was with her brand-new murderer-brother.

Yes, Smush Parker is the murderer in this analogy. And so is Chris Mihm and Luke Walton and Brian Cook. And so, tonight, is Andre Iguodala, for some reason.

Someone asks Kobe if Iguodala can cover him better than anyone in the NBA.

“Is he in the higher percentage of defenders?”

He’s a reporter. He’s doing a good job. He’s trying to get Kobe to say Iguodala shut him down because he had 14 points in a win.

His answer is now a resigned, forced calm.

He didn’t say this: “I don’t think you understand this. I got 14 points on purpose. I got 14 instead of 30 because I chose to do so. I got 14 points because I needed Antawn Jamison to get 33. I needed him to get that to prove he still could. I got Jodie Meeks 21 points tonight just by standing there. I had 8 assists. I’m a shooting guard. Did you see that?”

He didn’t say any of that. He should have, but he didn’t.

Oh, right, after the workout, it’s not a nap. It’s a 15-minute ice bath. Every day. Baseball players have steroids. They get huge, play until they’re 42, then their heads get too big and they retire. Kobe has 4 a.m. workouts and ice baths.

Turn on talk radio. They’re trying to figure out what’s wrong with the Lakers.

There’s a man who calls into The Max & Marcellus Show. His name is Shaul. He’s made a lot of money in tailored suits, he says. He has a thick, cartoon accent. He is somewhere between 35 and 175 years old. He has discovered the source of the Lakers’ every worry.

The world is separated into weenars and loosehurs, he says. Jerry Buss is a weenar. Phil Jackson is the ultimate weenar. Mike D’Antoni is a loosehur. Mike Brown? Loosehur. The paramount loosehur is Jim Buss. According to Shaul’s investigation, Jim Buss has bet on horses 150 times and won zero races. Loosehur.

Max Kellerman asks if, maybe, there is any possible way Kobe is at fault.

“Listen to Kobe, how he talk: ‘This coach (former coach Phil Jackson), look what he did to our team. This coach, he took player like Luke Walton—he make him superstar,’” Shaul says. No, Kobe’s not the problem. Kobe should be hiring the coaches, he says.

This is a man who believes that the heart and soul of the Lakers’ problems lie in a spell cast upon the whole franchise by the loser son of the owner of the Lakers.

But Kobe Bryant? Him? The problem? Don’t start talking crazy.

Talk to the Nike people. Talk to them about how Kobe is both the best and most demanding player they have to work with.

Talk to Kobe about the first time he walked onto their campus in Beaverton and started telling everyone what to do.

At the end of this Denver game, the post-game show is buzzing on every TV in the media dining room at Staples. When the Lakers look like they’ve figured it out, the glow from the post-game anchors can cook an egg. The optimism is a tangible, electric beam.

One of the anchors is talking about how important it is to get Kobe’s teammates “engaged” and “motivated.” She’s talking about Dwight Howard, really, who had 28 and 20 and was bouncy and jawing and used JaVale McGee’s shoulders as dunk handlebars all night. That’s the challenge, she says. Keeping everybody attentive.

There’s a guy in the room listening to this, eating popcorn. Sort of surreally, he yells at the TV. “It’s not that simple, you stupid…” then he uses a word for a woman that only the British and people in prison can get away with.

OK. This should fill up any decent person with a Big Gulp-sized carton of piss and vinegar. A lot of me wants to go over and spill it all over him. “You’re terrible. Stop being so terrible.”

Yep, somebody should say that to him for the following reasons:

1) Everyone in this room has clearly put in some time being considerably less terrible than this guy. Objectively, this guy sucks, and he should hear about it.

“You should really be less terrible.”

Kobe could say this. Every day. He ragged on Smush Parker specifically, but that kind of player is the rule, not the exception.

He does not do this. He does not rag on people in huddles or in public. Not really. Not anymore. And he has five rings. There’s got to be something to that.

And 2) The second reason is that this guy is wrong.

It is that simple.

It is that simple. It is also humanly impossible.