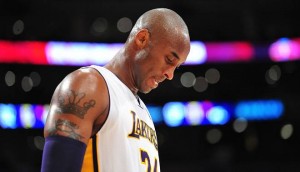 Prior to the start of the season, this is not how anyone pictured things going for the Los Angeles Lakers, after all of the splashy moves they made in the summer.

And yet, here we are.

Naturally, Kobe Bryant is infuriated by his team’s struggles, and says it’s time for everyone — especially Pau Gasol — to toughen up, or else there will be hell to pay.

“I’ll kick everybody’s ass in this locker room if it doesn’t happen,” Bryant said after a 113-103 loss to the Orlando Magic at Staples Center. Yes, the 6-10 Orlando Magic. “It’s the attitude you have to have. Metta (World Peace) is the same way. Dwight (Howard) has it in him as well. Even though he smiles a lot, he cares a lot about this. Come hell or high water, this has to get done.”

“Pau has to make some adjustments, obviously, to his game. He might not be posting up as much as he likes, but he just has to adjust. The reality is, I’ve adjusted. I’ve never run this many screen-and-rolls in my entire life. But I’ve worked on it. I’ve worked on handling the ball; worked on coming off screens and making plays. I’m used to being in the post much, much more. You have to adjust; you have to master what it is we’re trying to do here. Pau’s talented enough and good enough to be able to do that.” […] “Put your big-boy pants on,” Kobe said with a trace of disgust in his voice. “C’mon … just adjust. You can’t whine about it or complain about it. Heck, I’m 34 years old, and I’m running screen-and-rolls out there because Steve (Nash) is out, and my ass is running up and down the court more than I ever have in my entire career. But you have to adjust to it. I stay after practice and work on my ball-handling and screen-and-rolls, and when you have the talent to adjust to it, you just … have … to … adjust … to … it. We’re not going to lose (Pau). This is just not going to happen. I’ve been around him long enough to know how to deal with him.”

The last comment from Bryant regarding Gasol sounds like a threat … which probably isn’t too far from reality.

Pau is posting career lows in points (12.6ppg) and field goal accuracy (42%), and generally looks lost in coach Mike D’Antoni’s offense. He was on the bench late in the fourth quarter last night, as the Lakers suffered their latest humiliating loss.

Kobe Bryant’s threats of violence notwithstanding, it promises to be one long, strange season in Los Angeles.