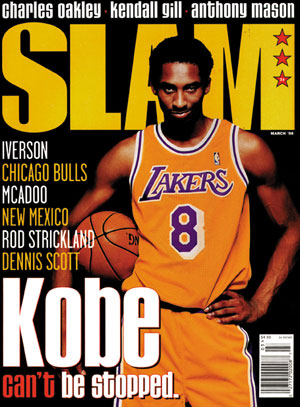 Sixteen years ago this month, we gave Kobe Bryant his first solo SLAM cover. Or maybe, he gave us his first SLAM cover. The wording really depends on the two parties’ status in the game.

When Kobe was in his second season, slowly establishing himself in the League and coping with his crushing air-ball fest in the ’97 Playoffs against the Jazz, he welcomed SLAM’s attention. We were in just our fifth year, but we’d already become a fixture in high school basketball players’ bedrooms and NBA teams’ locker rooms.

Kobe gave us a lengthy photo shoot (as depicted at right) by Piotr Sikora (now the Sr. Director of Photography for VH1). With the Lakers’ help, Kobe gave us all sorts of behind-the-scenes access, letting writer Cheo Hodari Coker (now better known for writing Notorious) chill with him in the training room and drive around with him. It was the type of story Esquire or SI would produce, but with SLAM’s flavor sprinkled on it.

We still get time like this with NBA guys, to some degree, as I think the recent Stephen Curry and Paul George covers/stories show. But not from Kobe. Now, he holds the power. He’s a 14-time All-Star, a five-time Champion, a megamillionaire serving as a centerpiece of a shoe company’s basketball line for the second time. And, as you might have heard, he’s had some injuries to rehab from lately. So when he and Nike team up to release a new shoe and offer the chance to “speak” with Kobe, the basketball and sneaker worlds line up.

Lengthy one-on-one interviews? Exclusive, time-consuming photo shoots? Driving around with a writer?! Not happening. If you’re SLAM, feeling like it’s past time to give your readers’ first/second/third (pick one) favorite player one more solo cover, what do you do with these modern circumstances?

Here’s what: You graciously accept Nike’s invite to the Kobe 9 launch, you make yourself a part of every interview session and you send Kobe’s boy, photographer Atiba Jefferson, to a Laker game with strobe lights and the orders to shoot no one but KB all night long.

Then, when Kobe suffers another injury just as he looks like he’s getting over the first one, you resolutely stick with him on the cover because he’s the only active player that has achieved such iconic status. And then, finally, you sit back and hope your cover and story are as well-received as they were in 1998.

And just in case Kobe’s haters don’t want to support him, you pack the issue with the usual greatness to make sure everyone cops one. Please do your part.