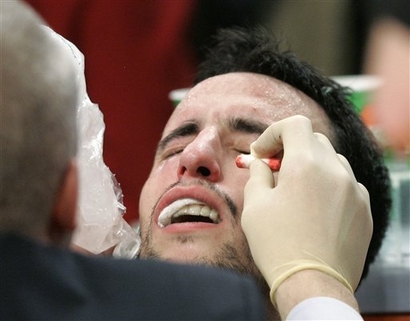 Kobe has been suspended for tonight’s game at MSG. The incident was at the end of regulation when Manu Ginobili blocked his shot, and Kobe went to get the ball back and may have struck him. It’s always hard to tell cause Manu is such a flopper. Ron Artest was suspended for a playoff game for elbowing him and now this. I guess the crazy guys don’t like him. Meanwhile Bruce Bowen is allowed to wreck his undercutting havoc on the league to his heart’s delight.

This game is proabably a sell out, with Kobe’s star power attracting every celeb in the tri state area, not to mention every power broker in the city. I have a feeling many people paid much more than face value for tonight’s game. It’s one of those magical nights that give one of the most poorly mismanaged franchises in sports their precious top ranking in Forbes magazine.

Kobe has to appeal this and he’s got to play tonight.