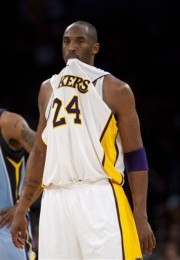 As the Memphis Grizzlies were running circles around the Lakers on their home floor last night, things took a strange turn for LA. Head coach Mike Brown benched Kobe Bryant midway through the fourth quarter, to the amazement of everyone in the building.

According to the national TV broadcast, Metta World Peace had to be told twice to enter the game for Bryant because he was so surprised by the move. Mike Brown offered little explanation, other than cryptically telling reporters postgame that he felt a sub was needed for Kobe at the time.

The Lakers’ superstar guard admitted that he was upset with the benching, but refused to criticize his coach. From the LA Times:

When a reporter asked if it was correct to assume he was upset over the benching, Bryant said “of course I was. That’s an astute observation.” But Bryant refused to criticize Brown. “It’s his decision to make. He’s the coach. If you guys are looking for a story, I’m not going to contribute to it,” Bryant said. “I can’t sit here and criticize his decisions. Leading this ball club, that’s not something I can afford to do. I had his back the whole season. I can’t start doing something crazy now. It would make no sense.”

Meanwhile, Brown said three variances of “I just decided to make a sub” and offered little explanation on why he benched Bryant in favor of Metta World Peace. “There was not one particular thing,” Brown said. “I just made the sub, went with Metta, sat [Bryant] for a couple of minutes and tried to go back to him. But it didn’t work.”

With fans chanting his name, Kobe Bryant returned to the game with just under two minutes remaining, but could not help the Lakers pull out a win.

The loss was frustrating on many levels for LA: they played shoddy defense, their rebounding was abysmal, and the team seemed to lack the energy needed to keep up with the hungry Grizzlies.