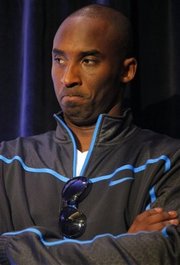 Every day that passes without a labor agreement in the NBA is another day that Kobe Bryant can’t play for the Los Angeles Lakers. That, as you might imagine, does not sit well with the self-proclaimed Black Mamba.

Bryant, rumored to being agreeable to the owners’ proposed 50/50 split of basketball-related-income, tells Yahoo! Sports that he wants both sides to meet again prior to Wednesday’s deadline, in order to save the 2011-’12 season:

Los Angeles Lakers star Kobe Bryant also has urged owners to resume talks with the players union and complete the labor agreement. “We need for the two sides to get together again before Wednesday, because we’re too close to getting a deal done,” Bryant [said]. “We need to iron out the last system items and save this from spiraling into a nuclear winter.”

The owners are threatening to pull their current offer at 5 p.m. ET Wednesday and return to proposing a 53-47 revenue split in favor of the league, as well as a hard salary cap and contract rollbacks. This act would almost certainly move the players to decertify the union, and could cost the NBA the entire 2011-12 season. The Players Association offered to drop its revenue split to 51 percent on Saturday, but wanted several system items – including sign-and-trade deals and full midlevel exceptions for luxury-tax paying teams – as part of a new CBA.

For Kobe, this lockout has to be particularly tough to deal with.

He’s clearly entering the twilight of his career, and there’s not a lot of time left to reach the personal milestones he’s set his sights on, to say nothing of his championship aspirations.

The decision to accept or reject the owners’ latest proposal, for many NBA players, will come down strictly to dollars and cents. However, for guys like Kobe Bryant, there are other overriding factors at play here.