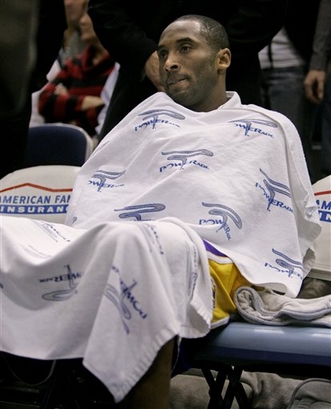 So Kobe got another suspension and the Lakers got another loss. Nothing nice about being a Laker fan these days. Personally, I think this kindergarten league has gone to hell. There are suspensions and fines being thrown out for nothing. And what the hell is Stu Jackson talking about? He has never seen Kobe do this before?? (Not since the Manu incident anyway.) Well, newsflash Stu, Kobe has been doing this ever since he came into the league! He’s not trying to hurt anyone, just trying to get the officials attention and draw the foul. Kobe does this automatically on these types of plays, and I think it will be extremely difficult for him not to do it the future.

Anyway, I wanted you to see James Worthy’s reaction to all this, which I wholeheartedly agree with. He is dead on about everything and makes me miss the NBA of the ’80s even more.

Chris sent along a link to a clip I couldn’t get downloaded of James Worthy on the Lakers pregame show. I assume Worthy

was supporting Kobe on this, because he was on a TV show where the Lakers were paying him to say good things about their team. (Hey, I’d do the same thing if Dr. Buss was the man who CTC around here.)

Look, I just watched the video of the Kobe/Jaric incident again and it’s pretty obvious that Kobe is trying to create contact with Jaric. I think we can all agree on that, no matter if you’re a Lakers fan or not. Creating contact is something that really good players do. Michael Jordan did it. Shaq does it rather forcefully. And Reggie Miller was probably the best of all time at doing this on the hush.

Kobe’s problem is that instead of doing this on the hush, he’s doing it flagrantly and obviously. (Insert tenuous Kobe Bryant psychological parallels here.) You can try to draw contact and create a call, but you can’t elbow people really hard in the face. And if you do elbow someone really hard in the face and get caught doing, you definitely can’t do it again a few weeks later and expect to get away with it.

Was Kobe trying to hurt Marko Jaric? I don’t think so. Kobe was trying to hurt the TWolves by getting a foul called against them. Jaric’s face just got in the way.

The real question here is whether or not Kobe’s arm-swing warrants a suspension, but that’s really a bigger-picture question for David Stern and Stu Jackson. Is the League “softer” now than it was 20 years ago? Maybe, maybe not. But it doesn’t matter because it is what it is. Here are the rules, David Stern says, now you go play under them.

The rules are what they are. Kobe did it once and got a suspension, so why should the punishment be any different a month later? Seems to me this is a case not of the rules needing to change, but of a player needing to change. And in this case it’s Kobe.