A line of fans stretched all the way around 2nd street, just off Marin Boulevard in Jersey City, NJ. They’d been waiting outside of Packer Shoes for hours, and the ones at the front of the line had been there damn near all day. The breeze rolling in off the Hudson River kept the weather cool and the sun, just starting to set, was still providing some warmth.

They had come from all over the New York and New Jersey area to see Kristaps Porzingis. The pride of the Knicks was on his way to Packer for the very limited launch of his adidas Crazy Explosive 17 PE. The blue and orange sneaker was already sold out and all the people waiting down the block were the lucky ones who were able to secure a pair beforehand.

At 7-3, with long-ass arms and a skinny frame, KP’s impossible to miss. So when he hopped out of his car, the entire street filled up with noise. They cheered his name, clapped and yelled for his attention. The Knicks now belong to the 22-year-old kid from Latvia.

We chopped it up with the future of New York hoops just before he spent two hours signing autographs and taking pictures with everyone who had made the trip.

SLAM: How closely did you work with the design team to cook up this colorway?

Kristaps Porzingis: I told them what I like and they put it on paper. Actually, I like this one a lot but it’s not my favorite one. There are other colorways that I prefer more. I like clean stuff. I like white and orange. As the season goes on, I’m gonna rock different colorways and it’s gonna be pretty cool. But this shoe is beautiful.

SLAM: It’s well-known that the Crazy Explosive is made with BOOST. But the other signature quality is the Primeknit collar.

KP: Yeah, I’ve always enjoyed playing in high top shoes. How it looks is awesome. You can also wear it [off the court]. That’s what I love about the shoe. And it’s made for basketball. It’s not a big man shoe, it’s not a guard shoe. It’s for everybody. I feel like the shoe fits my game.

SLAM: Sneakers and New York, they’re snynomous with each other. And you’re out here with kids lined up around the block to get your sneaker. It’s a huge deal to have a sneaker drop in NY. Did you ever expect this when you signed with adidas?

SLAM: You’ve been here in New York for a few years now. What comes to mind when you think about New York and sneakers?

KP: New York has a lot of sneakerheads. A lot of people that love sneakers and that appreciate the culture and the history and everything about it.

SLAM: What about in the locker room? You’ve got Willy Hernangomez, Joakim Noah and Kyle O’Quinn, who are also adidas guys.

KP: Yeah, of course. Even non-adidas guys a lot of times ask me about the shoes and if I can get them a pair of NMDs or Ultra Boosts. Adidas is the best shoe out there for me.

SLAM: Adidas is climbing up the ranks right now. What are you guys doing that’s giving you all of this momentum?

KP: We’re different. We’re creative. That’s what sets the brand apart from other brands. We’re at the top right now and with the players that we have, we’ve got to keep going up. Lifestyle’s always been at the top. Adidas has a lot of swag.

SLAM: Speaking of swag, what’s the most popular Three Stripes sneaker off the court right now?

KP: Obvisouly the Yeezys. The Yeezys are also one of my favorites. But there’s just so many. The Ultra Boosts, NMDs, they’re unbelievable. They’re super comfortable, everyday shoes that looks cool with everything. I don’t think anything can beat that. 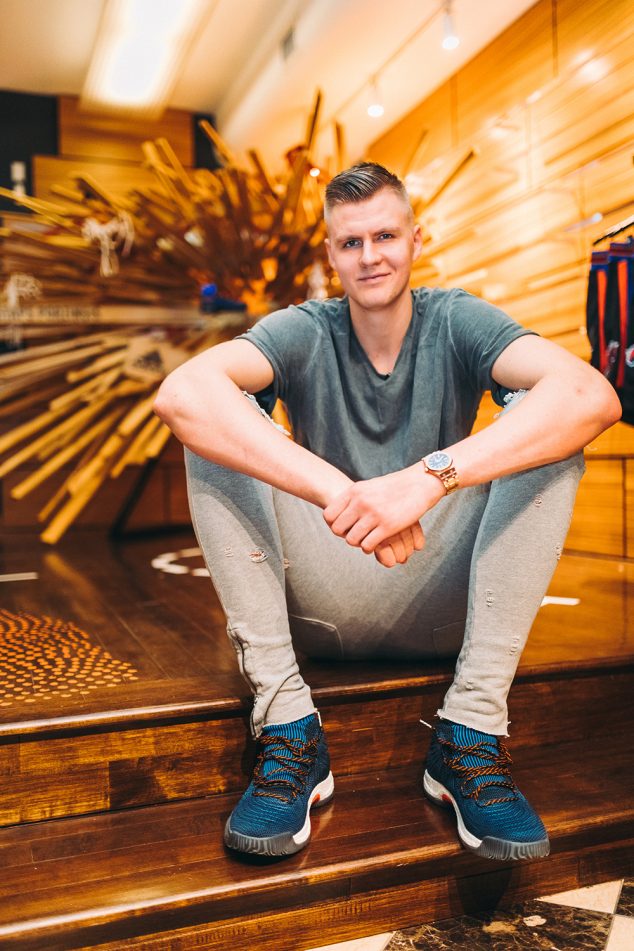 SLAM: Joakim and Kyle both have big personalities. Does one of them stand out as the bigger jokester?

KP: Kyle is just super funny. He just wants to joke around all the time. He actually has funny jokes and once he starts going, he’s just unstoppable. The whole bus ride, he’ll be cracking jokes.

SLAM: When he’s not making jokes, what do you guys listen to on the bus or in the locker room?

KP: Actually Kyle was the DJ today. When we were lifting we were listening to some Meek Mill. But we have all kinds of different songs. When we warm up, we have some Nas, some Biggie. We switch it up all the time. Guys [on the Knicks] have good taste in music.