Kristaps Porzingis Talks adidas, Knicks and Players Trying to Dunk On Him

In his second year as a pro, Knicks big man Kristaps Porzingis is quickly emerging as a star player. Starting to realize his potential, Porzingis said earlier this week that he and Karl-Anthony Towns are “two big men that can change the game.”

Averaging 21.4 points per game, 7.2 boards and 1.5 blocks per game for the 9-9 Knicks, KP  has social media going crazy with a highlight block, massive dunk or deep 3-pointer every time he touches the floor. At 7-3, Porzingis is living up to and exceeding the hype he built in his rookie year.

Off the court, Kristaps is well on his way to becoming a star endorser for adidas. Having signed a multi-year contract with Three Stripes in October, Porzingis joins a dope roster that includes teammates Derrick Rose and Joakim Noah, as well as Damian Lillard, Andrew Wiggins and Kyle Lowry. The big man has been hooping in Crazy Explosives all season and if things keep going the way they have been, it could only be a matter of time before the Latvian native gets his own signature look.

On Thursday night, Porzingis, along with teammates Willy Hernangomez, Kyle O’Quinn and DRose dropped by the new adidas store in midtown Manhattan. SLAM chopped it up with Porzingis about signing with adidas, the Knicks and how he feels about players trying to dunk on him.

SLAM: You made big news in the sneaker world by deciding to sign with adidas. Why did you decide to sign with them? What was their pitch to you like?

Kristaps Porzingis: What I loved about adidas the most is they give their athletes freedom; they let them create, they let them have a voice. In the meeting I had with them, everything I wanted to hear, I heard. It wasn’t about the money, I really felt that this was the brand for me, it felt right. I knew what I wanted at that point.

SLAM: How have you liked playing in the Crazy Explosive so far?

KP: Honestly it’s much more comfortable than I expected. The landing after my dunks is so soft, I don’t hurt my feet at all. I know they’re still working [on a new design of the shoe], so the shoe will only get better. It’s amazing for my feet, I have nothing bothering me.

SLAM: For a big dude like yourself that’s so important.

KP: Super important. That’s why the number one thing for me was if I decided to switch brands from Nike to adidas, the shoe had to be comfortable because my feet are the most important thing, basically.

SLAM: You and Karl-Anthony Towns both had a huge game earlier this week. Is it cool to think that you two will probably be matching up for at least the next decade?

KP: I hope so, I hope so. That’s a dream for me to have a long, successful career in the NBA and it’s the same for him. Hopefully we have many more chances to play against one another and have a long rivalry.

SLAM: The Knicks are 6-4 in the last 10 games. Have things changed at all since the start of the season, or are things just starting to click a little bit for you guys?

KP: We’re figuring it out on the court as we play a lot of times and we’re realizing how much talent we have. This is a big season for us, we can’t just let it pass by, we have to take every opportunity and treat every game like it’s our last. We can’t feel comfortable at any point. We’re still figuring it out, we’re not even close to what we can do and how much potential we have. We’re working towards that and once we click 100 percent, we can do big things. 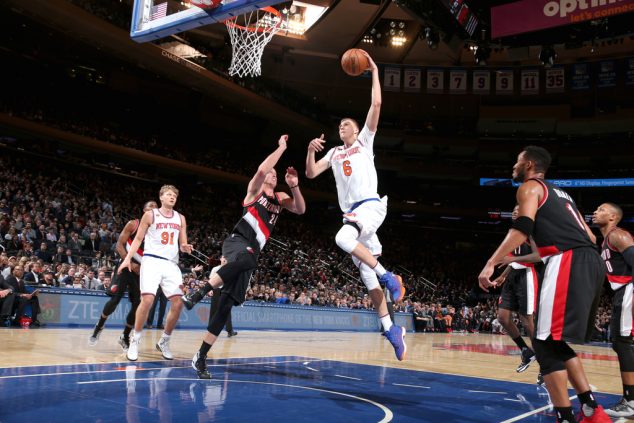 SLAM: You’ve been taking right around 20 shots over the past five games. Have you been getting more plays drawn up for you or is everything coming in the flow of the offense?

KP: I think the point guards are looking for me. They want me to attack, they want me to create for others and the ball is getting to me. It doesn’t mean every time I have to attack, I can drive, kick out and keep playing and good things come out of that. I think it’s more teammates are finding me and know what position I’m going to be in and where I can attack and be effective.

KP: Yes, for sure. Since I’ve been here he’s been that guy for me and he still is the guy that draws the most attention from the defense. That gives me more space and more options to be open. Same thing with Derrick, he’ so aggressive and he creates for others and that’s what we love about him. The defense collapses and he’s able to kick the ball out and get me good looks.

SLAM: Earlier this week Zach LaVine said he would try and dunk on you if you two met you at the rim. Do you think he changed his mind a little bit after the block you had on Shabazz Muhammad?