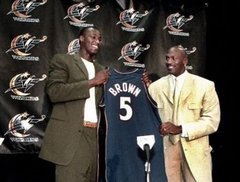 MJ’s front-office career in no way mirrors the success he enjoyed on the court. With the latest signing, Jordan gets another crack at trying to make something positive out of the most notorious mistake of his rocky journey as an NBA exec.

Kwame Brown, the former top overall pick, has reunited with his former tormentor, this time in Charlotte. The one-year experiment will reportedly cost MJ and the Bobcats $1.3 million.

The Charlotte Observer weighs in, and says this move is largely about addressing the team’s payroll. The journeyman Brown was inked with an eye on dumping Erick Dampier’s enormous contract.

Kwame is also expected to provide some defensive help for the Bobcats, though his agent oversells what he can do, as agents are wont to do:

“Most people would think (Brown) would run away from going back to play for Michael again. That’s not the case. Kwame welcomes it,” [Mark] Bartlestein said.

“Kwame is one of the best post defenders in the league, everyone agrees on that,” Bartlestein said. “Is he going to average 20 points a game? No, but he can be a terrific starting center in this league. The most important thing is to take it one step at a time and gain back the trust and respect in the league.”

All I know is that every interaction between Mike and Kwame in Charlotte should be televised.