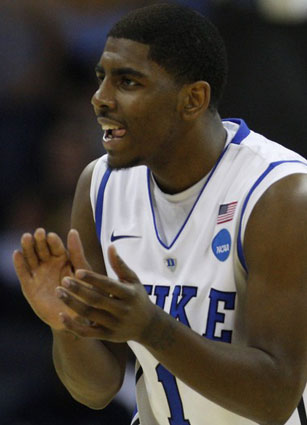 If you ever want to see a future NBA player’s eyes light up, watch him as he’s handed a luxury watch, given complimentary private jet packages and fitted for a high-end, custom-tailored suit. That’s what Kyrie Irving, Alec Burks and other NBA draftees experienced Tuesday as they rolled through Sean John’s gifting suite at a hotel in midtown New York City.

The event, officially termed the 2nd annual NBA pre-draft fine tailoring and gifting experience, is just one of many the League’s next wave of players are attending as they navigate the Big Apple in preparation for Thursday’s Draft. I got a few minutes each with Irving and Burks as they left the suite to attend other scheduled events. Check back Thursday for interviews with more NBA draftees.

SLAM: Is there one thing you can reveal about Coach K, something about his personality that nobody knows?

SLAM: What was your impression of how he ran practice when you first went through it?

KI: Hopefully I can do this for about two more weeks. Once I knew I could get through his practices then I knew I’d be in the best shape possible.

SLAM: Did that impression change by the end of the season?

KI: Yeah, definitely. But throughout the year a lot of college coaches kind of take a step back on how hard they go based on how many games you play during the week. Every coach has his own system, his own style. About once or twice per week we’d go really hard; other practices we had to play, so it kind of varied.

KI: I’m pretty excited; I’m really excited. I’ve been experiencing as much as possible and take it all in. So, I’m just excited.

SLAM: Is it even possible for you to know how you feel right now given everything going on? There’s got to be some nervousness, some excitement.

KI: Yeah, definitely. There’s a lot of anxiety going into this. Like I said, I’m real excited because I’ve been waiting all my life for this moment.

SLAM: Are you confident you’ll go number one?

KI: Uh, I’m really hoping the team that is going to pick me wants me to be their point guard. Whoever that is, I’ll be happy.

SLAM: Assuming you go to Cleveland, can you play with Baron [Davis]? How do you feel about that?

KI: I’ll kinda take that into account when that situation does happen. Right now, I’m just at the gym preparing to be the number one pick or number two or whatever.

KI: He’s a very charismatic coach and person. He really expects a lot out of you. He put me through one of the hardest workouts I’ve done in my life. It was really tough.

SLAM: And he’s been a guy who coached Baron earlier in his career. He coached Chris Paul, who you’ve been compared to. That has to be comforting to know, if you’re drafted by the Cavs, that Byron has helped develop successful point guards.

KI: Oh yeah, definitely. His guidance brings point guards to where they’ve never dreamed of, so him having that resume just makes me more excited if Cleveland does pick me.

SLAM: Do you think teams critique weaknesses too much, and maybe don’t discuss a player’s strengths enough?

KI: Hmm, I’ve only gone to one workout. And what I did there was basically a lot of running, a lot of drills. There are going to be weaknesses shown regardless. I don’t think they necessarily target a guy’s weaknesses. They just want to see if you have the skill set to succeed in the NBA or not.

SLAM: And this week – do you have it planned hour-by-hour or do you have some free time to just relax?

KI: I was looking at my schedule downstairs and I had to fill out five papers. My schedule is all crazy.

SLAM: You got your Draft Day suit picked out?

Alec Burks: Yeah, I’m getting suited and fitted for today, so I feel like I’m gonna be nice – real nice.

SLAM: You look at any past suits worn by guys for some influence or to avoid?

AB: Nah, I’m just gonna do me. I ain’t gonna worry about nobody else. I’m gonna put my style into it.

SLAM: What about basketball shoes? What have you worn in the past?

AB: Uhh, Nike, adidas. Both of them. Nike right now. I don’t have a [shoe] deal, just wearing them.

SLAM: What do you look for in a shoe?

AB: Comfort, you know, style, of course. Those two. Anything else I can rock with after that.

SLAM: You got any favorites all-time?

SLAM: What are you doing to relax this week? Can you get your mind off the Draft?

AB: You can’t get your mind off of it. It’s two days before the Draft. I’m just gonna take this all in. I’ll relax when I get back home.

SLAM: What’s your impression of how this Draft process has been the last couple weeks?

AB: It’s been a grind. A blessing but a grind at the same time. People don’t understand, behind-the-scenes, how hard we work.

SLAM: In your Sacramento workout, Klay Thompson said you got him in team workouts. You agree with that?

SLAM: You’ve said Jamal Crawford and a young Tracy [McGrady] are the guys you model your game after. Have you watched film of them?

AB: Nah, just growing up and watching them. YouTube and highlights of them, all that.

SLAM: Is there a particular part of their games, besides athleticism, that you try to replicate from them?

AB: It’s just the way they score. They score however they want to; that’s how I feel like I score.

SLAM: You grew up near Kansas City, right? You grow up a Kansas fan?

SLAM: You excited about Colorado going to the Pac-12 this year?

AB: Yeah, I’m excited. I feel like they can do some things.

SLAM: What are you gonna do on Draft Day? You’re in the Green Room, right?

AB: Yeah, I’m in the Green Room. I’m just gonna wait to hear my name called, to put that hat on.

SLAM: What facet of your game do you feel like you need to work on this summer?