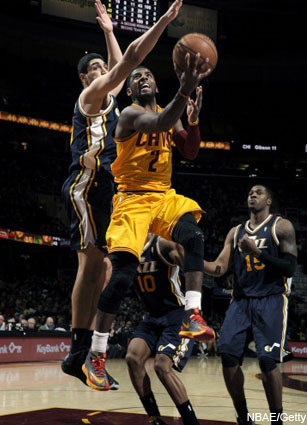 Cleveland has suddenly won eight of its last 11 games and might be making a legitimate push for the playoffs. And even with a fan awkwardly coming on the court to greet him, Kyrie Irving (21 points, 12 assists, 10 rebounds) earned his first career triple-double by dominating all aspects of the court. He looked like a max-contract player that Cleveland wouldn’t want to let go. The question is if he can consistently keep up this level of play. He had plenty of help from his big men as Tristan Thompson (18 points, 14 rebounds) and newcomer Spencer Hawes (13 points, 16 rebounds) both posted double-doubles and helped the Cavs dominate the boards, 56-31. Gordon Hayward (18 points, 7 rebounds, 7 assists, 2 blocks) had a nice overall performance but didn’t get much help from his teammates, as the Jazz only scored 52 points after the 1st quarter. Cleveland, on the other hand, racked up 60 points in the 2nd half alone, going on a 17-2 run bridging between the 3rd and 4th quarter. The Cavs eventually led by a game-high 23 points in the final minute of the game. Shooting 35 percent from the field for the game, Utah simply couldn’t make enough shots to keep up with Irving’s stellar play.

Elias says only two NBA champions have ever lost four straight games at any point in the regular season. The Thunder went into this game trying to avoid a fourth straight home loss against a Memphis team that has had their number in the past. And the Grizzlies almost pulled off the comeback win before falling apart in the final few minutes. To no one’s surprise, Kevin Durant (37 points, 6 rebounds, 5 assists) played a key role in holding off the Grizzlies, scoring 13 4th quarter points and eight in a row late in the game. Mike Miller (team-high 19 points, 4-5 on 3-pointers) had a great game for Memphis, especially during a 4th quarter in which he scored all 19 of his points. Miller, though, missed a 3-pointer, layup and technical free throw in the closing minutes. Zach Randolph (13 points, 10 rebounds) had a double-double while Marc Gasol (17 points, 4 assists, 3 rebounds) had an off night on the boards. After Durant made a 3-pointer early in the 2nd half, Oklahoma City was up 63-44 and led by double-digits the rest of the 3rd quarter. Then came the Grizzlies’ surge, as they went on a 14-4 run in the 4th quarter to make it a 105-102 deficit. But they couldn’t finish off the job with Durant and Serge Ibaka (16 points, 9 rebounds, 3 blocks) grabbing some big boards. Russell Westbrook (21 points, 6 assists, 3 steals, 1 turnover, 7-12 from the field) seemed to be more in control of his body and play Friday night. As a team, the Thunder shot 27-32 (84.4 percent) on free throws.

The last time Stephen Curry (27 points, 11 assists, 11 rebounds) was at Madison Square Garden, he scored 54 points. Friday night he settled for a triple-double against a defense that is becoming nonexistent. And the supposed leader of that supposed defense, Tyson Chandler (6 points, 12 rebounds, 5 fouls), made a fool of himself, being ejected late in the game. Carmelo Anthony (23 points, 16 rebounds) had another great line but showed clear signs of disinterest as the game wore on. Anthony made the first basket of the night, giving his Knicks a 2-0 lead. They never led again, as the Warriors jumped out to a quick 38-27 at the end of the 1st quarter. It would eventually build to a 27-point lead and quickly be over for Knicks fans. Klay Thompson (25 points, 5-10 on 3-pointers) was shooting well per usual while Marreese Speights (12 points, 10 minutes) and Jermaine O’Neal (15 points, 6 rebounds, 20 minutes) provided valuable minutes off the bench. New York has now lost 11 of its last 13 games…with three more losses, they would be 20 games below .500. Curry is now one of five players to have both a 50-point performance and triple-double at the Garden; he joins Melo, LeBron James, Patrick Ewing and Bernard King. The Knicks are in a bad place right now…with each successive loss, the Melo free agency talk continually increases.

Charlotte had plenty of time to prepare to extend its season-best four-game winning streak and get ready for the Spurs, last playing Saturday night against the Grizzlies. But the Spurs had too much experience for the Bobcats to handle. The Parker-less Spurs had six players score in double-figures, led by the Big Fundamental—Tim Duncan (17 points, 16 rebounds, 6 assists). Duncan continues to be one of the most under-appreciated players and leaders in the League. This was certainly a sloppy game with poor shooting and plenty of turnovers. Manu Ginobili (15 points, 5 assists), Marco Belinelli (14 points, 4 assists) and Patty Mills (14 points, 6 rebounds) were a unified forced off the bench. Al Jefferson (20 points, 7 rebounds) led the way for the Bobcats, Josh McRoberts (4 points, 10 assists) showed off his passing skills and Gary Neal (15 points) put up respectable numbers against his former team. But coming out of halftime, the Bobcats couldn’t keep up with the Spurs, being outscored 51-37 during the final 24 minutes. After Kemba Walker (11 points, 4 assists) made a jump shot and McRoberts made a layup late in the 4th quarter, though, the game was knotted up 80-80. Then the Spurs ended on a 12-2 run by locking down defensively and knocking down free throws. Boris Diaw (4 points, 6 rebounds, 7 assists) quietly led the Spurs in assists, being the main distributor at times.

The Mavs and Bulls have been two of the quietest hot teams, as each recently went on a five-game winning streak. The Bulls came in winning seven of their last eight games while the Mavs came in winning 10 of their last 12. Chicago ended up using its elite defense led by Joakim Noah (10 points, 9 rebounds, 4 assists) to earn the road victory. However, Taj Gibson (20 points, 15 rebounds, +18) was the best big man on the night, scoring at will against the Mavs frontcourt. Monta Ellis (20 points, 5 assists, 7-19 from the field), Dirk Nowitzi (15 points, 5 rebounds, 7-18 from the field) and Vince Carter (15 points, 7 rebounds, 3 steals) led the Mavs in scoring but all struggled to put the ball in the basket in the final 12 minutes. Dallas could only muster nine points in the first 10:56 of the 4th quarter and ended the quarter shooting 6-23 (26.1 percent). The Bulls clamped down and started getting active on the perimeter and down low. Kirk Hinrich (17 points, 7-8 from the field) might not have provided much defensively, but he made a few big plays late. After trailing the entire first three quarters and by as many as 16 at one point, the Bulls kept chipping away and finally took a 77-76 lead with 10:26 to go after Jimmy Butler (19 points, 7 rebounds, 3 assists) knocked down some free throws. Every time Dallas made a run, Chicago had an answer. Hinrich would go on to knock down a 3-pointer and give his team an 84-78 lead with 8:17 to go. The Mavs called a timeout to regroup but were never be able to regain the lead. No Rose…no Deng…but the Bulls are now tied for the three seed in the East. Since January 1, the Bulls are an East-best 20-8. And with the recent signing of Jimmer Fredette, there might actually be something that is not Heat or Pacers related worth watching in the East playoffs.

In a game that would have been a primetime matchup at the beginning of the millennium, these two teams found a way to not make much sense. They both executed very poorly while, at the same time, finding ways to score prolifically. The Lakers ended the game making a franchise-record 19 3-pointers, led by Jordan Farmar (career-high 30 points, 7 assists, 8-10 on 3-pointers). Farmar also set a career-high in 3-pointers made in a game. The Lakers point guard has had some bad luck, being hurt when his team needed him most and being healthy when there have been plenty of guards available. Friday night, though, he reminded Staples Center just how much of a force he can be when his shot is falling. Newcomer MarShon Brooks (season-high 23 points, 3-3 on 3-pointers) had his best game since arriving while Pau Gasol (22 points, 6 assists, 5 rebounds) and Jodie Meeks (22 points, 8-8 from the field, 3-3 on 3-pointers) joined in on the fun. The Lakers shot a eye-popping 60.0 percent from the field, as the Kings looked lost without DeMarcus Cousins (suspension). Jason Thompson (17 points, 11 rebounds) had a double-double in his place. The Kings did go on runs of 10-0, 11-0 and 12-0 that all gave the team double-digit leads. However, with no anchor down low, they couldn’t sustain any of these leads. After an Isaiah Thomas (26 points, 8 assists) 3-pointer, the Kings led 92-77 with 3:44 left in the 3rd quarter. The Lakersen would go on a 31-13 run, capped off by a Jordan Famar 3-pointer. Two possessions later, Farmar knocked down another one from deep to give the Lakers a 111-107 lead. The Kings would keep it close the rest of the way, with Derrick Williams (26 points, 12 rebounds) and Rudy Gay (32 points, 7 rebounds, 5 assists) taking charge, but their team just couldn’t put together enough stops.

Phoenix got Goran Dragic (career-high 40 points, 5 assists) back, and he proved his value by leading his team to victory against a Pelicans team that lost Jrue Holiday for the season Friday (surgery on tibia). Dragic shouldn’t and won’t be considered by anyone as the MVP this season; however, he deserves to at least be someone in the running. His fans even chanted “MVP” late in the game. Before the season started, very few people thought the Suns would ever be 10 games over .500. But thanks to coach Jeff Hornacek and Dragic at the helm, they are 34-24 and fighting for a playoff spot. The Morris twins (33 points, 11 rebounds) have been the backbone for the Suns bench, providing toughness and energy. Anthony Davis (32 points, 9 rebounds, 3 steals, 1 block) played well in the loss, having some awkward shots find ways into the hoop. (This kid is going to be something else in a few years.) He got help from Eric Gordon (21 points) and Tyreke Evans (14 points, 5 rebounds, 4 assists), who finally found his way off an elevator. Led by Evans, the Pelicans used a 13-0 run in the 3rd quarter to take a 75-66 lead. But over the final three minutes of the quarter, the Suns went on a quick 15-6 run to tie it 81-81. After a back-and-forth start to the final quarter, the Suns used a 10-0 run to take control for good. Dragic now has three 30-point performances in February.