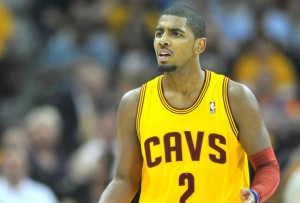 Kyrie Irving is headed back to the Chillin’ List.

The Cleveland Cavaliers’ star point guard has a hairline/non-displaced fracture on his left index finger, and will be sidelined for the next month or so.

Irving, the reigning NBA rookie of the year who is leading the team with 22.9 points per game, bruised his left index finger during the third quarter of Saturday night’s loss to Dallas, but finished that game. He complained about it afterward but traveled with the team to Philadelphia and played 37:18 in the loss, making just four of 14 shots. He had an MRI and CT scan of his finger on Monday that revealed a hairline/non-displaced fracture. According to a release issued by the team, the injury will be treated with taping and a splint. He will be re-evaluated in two weeks and his status will be updated as appropriate.

It’s the second significant injury suffered by the young point guard this year. He broke a bone in his right hand during summer-league practice last July in Las Vegas, although he recovered in time for training camp. Last season, he missed 14 games, 10 with a sprained right shoulder. He missed three games with a concussion and one when he was sick.

Other injured Cavs include Daniel Gibson (contused right elbow) and Tristan Thompson (nasal contusion), both of whom aren’t expected to miss any time.

Initially, Kyrie Irving put on a brave face when news of the injury broke, but eventually tweeted out his frustration regarding this latest setback.