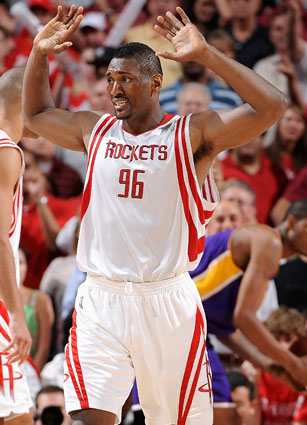 When Ron-Ron got up in Kobe’s grill piece in last season’s NBA Playoffs, most Laker fans couldn’t possibly imagine this maniac joining their squad. What they may not have recalled was that the two players are actually quite friendly with one another (with Artest being something of a Mamba fanboy), and Bryant has wanted Artest on his team for years.

Mitch Kupchak and the Lakers front-office made a bold move yesterday, dramatically altering the team’s identity by bringing in the ultimate wildcard, in a bid to repeat as champs while saving a buck or two. It is a high-risk, potentially high-reward gamble. It can also easily blow up in everyone’s face.

As a Laker fan, I wasn’t initially pleased with the Ariza/Artest swap, but these are the cards we’ve been dealt and so must make do.

But, let’s not kid ourselves. The cons of this move are plentiful: Ron can no longer truly be considered an elite defender (especially when dealing with super-quick wing players); he has a tendency to hog the rock; he will turn 30 this fall; the triangle offense is not easy to master; um, he’s RON FREAKING ARTEST; and did we mention that Pau Gasol was already feeling neglected before his team went out and added another shot-happy player?.

It’s not all bad, news, however. Artest averaged 17 and 5 per night last year, shot 40% from the three-point line, and is one of the League’s most competitive (and intimidating) forces.

This experiment can work. But it will not be easy. Which is why I’m here, to happily provide Ron with some do’s and don’ts as he makes the transition to Lakerdom. So, without further ado…

–This is Kobe Bryant’s team: There will not be any battles for Alpha Dog status on this here squad. This means he’s the only one allowed to deviate from the offense, doing his freelance thing, and occasionally taking horrific shots that make Tex Winter want to eat his clipboard.

–Pau Gasol is the number two man on the team: That means that you will not try to hijack this role. Even though you may come in second in the scoring column some nights, overall, you will happily play the third wheel. Got it? Cool.

–Listen to Phil Jackson: He is a wise man, with a head full of knowledge. He has made a career out of dealing with, ahem, “special” characters. He may be end up becoming the best thing that ever happened to your hoops career, even if he’s only around for one more season. Oh, and if you want to be on his good side, throw Mr. Zen a bone by actually reading whatever book he gives you prior to the start of the season.

–You’re not Dennis Rodman: Dennis was one of the first names mentioned when this deal was announced. Rodman was a force of nature when he joined the Bulls in 1996, a crazy, cross-dressing, hair coloring, rebounding machine that was delivered to us straight from the caves of hell. But here’s the thing. Dennis was way, way more of a headcase than you. You’re infinitely more manageable.

(Kobe and Phil won’t have to reign you in nearly as much as Mike and Phil did with Rodman. They understand that you will say and do wild things from time to time, and may have to serve a suspension or two during the season – just to get it out of your system – but if the last few years have proven anything, is that you’ve *gulp* matured and toned down the crazy.)

–The Triangle Offense is your friend: In essence, this means you will not hoard the ball; you will not mindlessly dribble out the shot clock before hoisting up an unconscionably awful fadeaway three with a defender draped all over you; you will swing the ball, make your cuts, and look for the open man. Shave little triangles into your hair if you have to, I don’t care.

–Don’t try to “hoodalize” (a word you invented on SportsCenter last night) Sasha Vujacic or any of your streetcred-free teammates: they’re fine the way they are. Leave them alone.

–Lamar Odom is also from Queens: This doesn’t necessarily mean that you can have neighborhood friends over for barbecues during the season.

–Don’t let L.A. get in your head: We know you love the city and the limelight, its action and manic energy. Don’t allow these things to get in the way of the ultimate goal. Become a winner in that town, and you’ll own it. This is the not-so-secret formula.

–There’s no need for you to “play” the role of enforcer: Guys around the L are already shook whenever you step on the floor, so just be yourself. Sure, go ahead and take the hard foul during a blowout just to let the other team know that it is not a game, but never let it get out of hand. You weren’t brought in to intimidate the opposition; that’s gonna happen organically. Just be you.

–Again, this time with feeling, the Triangle Offense is your friend: Treat her with respect. I can’t stress this enough, Ronnie.

Follow the above, and you should be fine. Laker fans will love you for your toughness, because you are fearless, and even though you come with baggage (and the potential to add some), you’re a hell of a ballplayer.

And in the end, that’s all that should matter. Here’s a golden opportunity for you to prove just that.