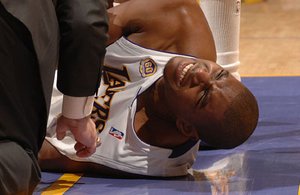 When Andrew Bynum came down on Lamar Odom’s foot in the third quarter last night, I (along with every other Laker fan) saw what was turning into an unexpectedly great season practically go up in flames.

As Bynum writhed on the floor in obvious pain, clutching his left knee, terrible thoughts raced through my mind: visions of 5-game losing streaks; an inability to close out tough road games; Kobe being forced to don the Superman cape every night; losing to the Suns all the time. Basically, a repeat of the last two seasons.

Holly sent me a text message late last night saying a friend of hers had just left the Laker locker room and things looked to be on the up and up for young Andrew. But I had a feeling it was bad. And I was right, unfortunately: An MRI revealed today that after suffering a subluxation of the patella and a bone bruise of his left knee, Bynum is expected to miss the next 8 weeks at the very minimum. Ugh.

The good news? He’s expected to make a full recovery. The bad news? Everything listed above.