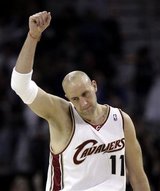 It’s one of those magical loopholes within the Collective Bargaining Agreement, and one that teams — especially title contenders — take advantage of all the time. And now that the Cavs are seemingly on the verge of re-acquiring Zydrunas Ilguaskas (30 days after “trading” him), their main rivals are up in arms.

Despite overtures from other teams, everyone assumes that Ilgauskas will be back in Cleveland sometime in March. Prior to last night’s wildly entertaining showdown in Hollywood, Doc Rivers and Phil Jackson served as the mouthpieces for their respective franchises, expressing mock outrage and concern about the Cavs’ plans.

Pro Basketball Talk has the quotes from both coaches:

“They’re going to get Ilgauskas back and it’s going to be one of those scenarios that we see in the NBA where you ship a player out, you get another player, then your player retires or they pay him off and then he comes back in 30 days,” Jackson said. “I don’t know what that does for the league.”

It was more ironic to hear Rivers complain about it — the Celtics did the same thing with Gary Payton back in 2005, when the Celtics traded the point guard for Antoine Walker, then got him back after the buyout.

No need to feel sorry for either coach (or team); given the opportunity, they would do exactly the same thing as what the Cavs are planning to do. The rules — crappy as they may seem — are the rules, and it’s up to the creativity of the front-offices around the League to take advantage of them.

Besides, who ever said that life was fair?