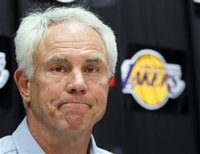 Whenever anyone asks the Los Angeles Lakers — be it coaches or players — about their struggles, to a man, they all smirk and say there’s nothing to worry about.

Despite the fans’ predictable panic, the team has maintained an air of cool, bored confidence. The benefit of having won the last two titles, I suppose.

One man who’s willing to publicly address the issues facing the squad is GM Mitch Kupchak, who admitted to the media that he’d be willing to shake up the Lakers’ roster if the right offer(s) came across the table.

Kupchak says he hasn’t sent any rival GMs emails or placed calls … yet.

“Regarding a trade, I may have to,” Kupchak said at the team’s practice facility a day after the convincing loss to the Celtics. “I’m not saying that I’ve made calls today or I’ll make them tomorrow. But I just don’t think that we’re playing as well as our talent level should allow us.”

Even speaking in his usual measured tones, Kupchak’s disappointment and frustration were obvious. More importantly, while saying he had not talked to owner Jerry Buss since being controlled by the Celtics in the fourth quarter at Staples Center, Kupchak said, “I’d be surprised if he feels any different.”

“I try to be as objective as possible, but I’m concerned that our performance is not living up to our talent level,” Kupchak said. “Our record is certainly OK. But we’ve lost a bunch of home games. We’ve lost a couple of big games at home. And to me, those are red flags … It’s something I may do in the future. I just don’t think that our talent level is playing as well as they can play. We have an incredibly high payroll and we do that because we have players that normally produce at a high level. And I’m not sure I see that now.”

A look at the roster — and more importantly, the sky-high salaries — shows that it won’t be easy to entice other teams to play the trade game. But, this is the NBA, and we’ve learned that virtually anyone can be shopped.

Later this week, LA will embark on a brutal seven-game road trip, and should they continue to come up short, Kupchak’s phone and inbox will surely begin to light up.