Lakers in; Your Move, Boston 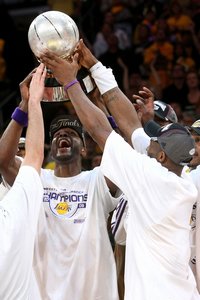 There was a certain inevitability to last night’s events. Even when the Spurs jumped out to a 17 point-lead in the early going, you never really got the sense that the series was going to head back to San Antonio.

(The Spurs were too old, and they simply didn’t have the offensive firepower to keep up for 48 minutes.)

Facing a huge deficit, Phil Jackson (as usual) didn’t seem particularly worried and left in his bench for long stretches. As they’ve done so many times this season, the bench mob trimmed the Spurs’ lead significantly, and set the stage for Kobe Bryant.

Bryant was, of course, absolutely brilliant in the second half, driving daggers into the Spurs’ hearts time and again – my favorite being the hanging fallaway over the outstretched arms of Tim Duncan late in the fourth quarter. And now, improbably, he (and the Lakeshow) are back in the NBA Finals.

It has been a surreal season for the Lakers and their fans, and though a monumental task awaits the team in the next round, right now it’s time to celebrate and reflect on the arduous journey back to the promised land.

Feel free to crack open the cigar box, Mr. Stern. The perfect ending to an amazing season is almost here.