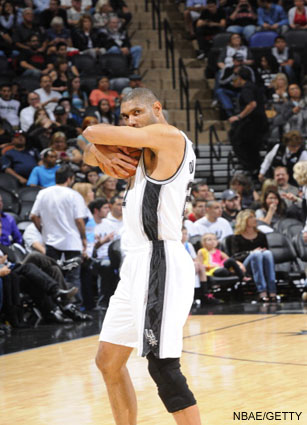 Against all odds, this is doable.

Sure, Kobe’s off pounding away at a bag of Swedish Fish in a wheelchair somewhere. It’s also true that Mike D’Antoni managed to piss off his third best player so much over the course of this season that Pau Gasol’s postgame press conferences started sounding like those slowjam breakup songs in the middle of Adele albums. And, yes, D’Antoni’s rotation is still basically the childhood game ‘Who Will Pass Out First?’

(I had a bad childhood.)

But the Lakers, a 7-seed that was under .500 a dozen games ago, have an honest-to-Jesus chance of pulling this thing off against the Spurs.

They’ve won eight of their last ten and put aside their soap opera BS long enough to compete in every must-win game in the process. Dwight Howard looks to be at about 90 percent. Pau Gasol is going through a career resurgence while his coach quietly gnaws on the foot in his mouth in the corner. Hilariously, Steve Blake is a beautiful flower made up solely of hope and sunlight. (That’s going to end real quick. Don’t worry.) And Steve Nash is coming back, so who the Hell even knows what that’s going to look like.

Even if you’re a Spurs fan, you’re thinking it: It’s doable.

That’s exactly why it’s not that doable.

First of all, the Spurs are used to this. They’ve been “too old” since 2007 and they officially use the phrase “they’re about as sexy as my dead grandparents” as fuel. When they’re overestimated, they do fine. (Think that Richard Jefferson Conference Semifinals team in 2010.)

But when they’re underestimated? Hold on to your ten gallon hats, suckers, you’re about to get yourself bored directly out of the first round.

Boring-ass isos. Parker at the top of the key, Duncan at the elbow extended, Manu wherever he can find it.

Boring-ass league-best closeouts. No guard penetration unless you have, say, Kobe. But the Lakers don’t. Not anymore.

Boring-ass everything, but boring-ass wins.

The only thing not boring as hell was last week’s Stephen Jackson drama. Gregg Popovich cut him after a series of practice blow-ups and signed Tracy McGrady. A lot of people are pointing to this as some sort of unraveling and a weird misstep.

Fear not. T-Mac’s the boat Pop got over the weekend on a whim as a midlife crisis, but he’ll never learn to drive it.

(That said, if he starts playing T-Mac this week, get your popcorn: You are in fact watching The Titanic on its way to meet an iceberg full of contested 20-footers.)

Tony Parker had the best season of his life. Do not forget that. He still has the blow-by speed, but his game management skills are reaching world-class levels. And he has to be getting sick of not making First Team All-NBA over and over again. It is patently unsexy to be this good at the same five things for this long, but he’s better at those five things than ever. He just doesn’t live in Los Angeles.

Tim Duncan found some new knees at a garage sale somewhere and began posterizing people again. His scoring and rebounding went up just as Spurs fans started talking about ways to humanely ship him to Puppy Heaven without the kids finding out.

I can’t say this any plainer: This team is not being taken seriously enough. Again.

LA has a chance. They always do. If Dwight plays like the ’08-’09 Dwight, the one that shed all vanity to prove he was worthy of all of the vanity, the Lakers are in good hands. What does that look like? That’s 20/15.5/3 blocks a night.

Then they’re going to need that anemic supporting cast to overachieve. Steve Blake can actually tone it down a little (23.5 ppg in those last two close-out games), but Metta’s going to have to be a wild nutjob on the defensive end and the Meeks/Jamison combo has to be relevant in, really, any way offensively.

If the Phoenix version of Steve Nash is still alive, a lot of the above problems are solved. That specific iteration of that guy is probably in a basketball museum somewhere next to Shaq’s size 26 shoe and a Wilt Chamberlain’s booty phone. But if he still exists, feel free to print out the rest of this preview just so you can laugh at it while you rip it up.

Then they’ll need the Pau Gasol who wants to ruin the rim because he’s endured five months of nonstop disappointed dad rhetoric from Mike D’Antoni. That’s the 17.3/15.7/7.7 assists per he showed off in those last three games.

If the Lakers can do all of this, they’re golden.

But it’s going to take all of it.

Look at it this way: If you’re betting on this and you’re trying to impress a friend or a lady with your balls and imagination, you take the Lakers. You give the reasons above, but you pretend like those things have been happening all season. They’ve been happening for three games. It’s sexy. It makes you look like you have a lot of loans out on expensive things you can’t afford because you just love life so much.

Here’s the reality: You will have to take more loans out. You will not love life so much. If you’re betting on this series and you want to win the bet, you take the Spurs.