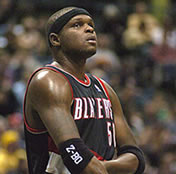 So, I spent some time in Portland last week for undisclosed reasons, and it just happened to coincide with a visit from Kobe and the Lakers. I wasn’t going to miss that. And, thanks to the incomparable Robyn Jamilosa, I didn’t.

• I’ve never been to the Rose Garden before, and it’s always cool to check out a new arena. As it turns out, the Rose Garden is pretty generic. Change the logo at center court and the retired numbers in the rafters, and it could be just about anywhere.

• The visitors locker room ain’t much. Lamar Odom sits off in the corner tying his shoes. We exchange some small talk before I turn and notice Kobe in the space between the locker room and the back, stretching with a big smile on his face. I’ve interviewed Kobe a bunch of times—we go back almost a decade—so I go over to talk about random things, mostly about his upcoming Nike signature shoe (the Kobe 2). He’s still pretty tight-lipped about the whole thing (it doesn’t drop until spring), but he does mention there will be three different styles (not different colorways, entirely different uppers) for different situations. He’ll debut one of them on Christmas Day against the Heat. No one else approaches us as we talk—I guess the beatwriters know he’s not gonna say anything on the record pre-game.

• Brandon Roy, the Blazers top rookie, is out tonight, as is LaMarcus Aldridge, their other lottery pick. Oh, and Darius Miles—who’s sporting a huge beard—is also out. According to sources close to the Blazers, he’s fine with that. He’d allegedly be more than content to retire. And, a week later, he gets more knee surgery and is out for the rest of the season.

• Re: the Blazers’s retired numbers. No Rasheed? No Isaiah Rider? So tragic.

• The team motto, as shown on the scoreboard, is “PRACTICE HARD, PLAY HARD.” Clever, that.

• The Blazer feel-good story of the year is Ime Udoka, a rookie forward from Portland State who wasn’t expected to make the team. Not only did he make the team, he’s starting. Along with Martell Webster, Jarrett Jack, Jamal Magloire and Zach Randolph.

• Two other interesting notes: Luke Walton, son of Bill, is starting for the Lakers in the city his father put on the NBA map. And Rick Adelman, who coached the Blazers to the Finals in the early ’90s, is sitting about 20 rows up just underneath the press/radio section. No fanfare for him, just a regular seat at midcourt.

• There’s a lot of yellow in the building. Kobe gets booed a lot, sure, but there’s no shortage of Laker fans.

• The Blazers mascot, a poor Rocky imitation, is terrible.

• Meanwhile, the Lakers commit their fifth team foul with 7:32 to go in the first quarter. I love this game!

• Shammond Williams is on the Lakers? I haven’t been this excited in a while.

• Z-Bo! Zach piles up 12 points and four boards in the first quarter, dominating the paint. Then he throws up an inexplicable half-court heave—with eight seconds left on the clock—which leads to a Laker break and a Vlad Rad trey at the buzzer. That’s Z-Bo for you, equal parts dominant and oblivious. 25-23 Blazers after 1.

• Darius Miles and Raef LaFrentz are next to each other on the bench in suits. Can’t imagine they’d have much to say to one another.

• The Blazers commit two more travels in a row. Not sure how many turnovers that makes, but it’s a lot.

• Will Bynum, who hasn’t done much of anything, threads a beautiful pass to Luke Walton underneath. Walton’s fouled, so nothing gets on the scoresheet for Bynum. But it was a great pass. Kid’s got a great eye. And then he gets called for a (surprise!) travel.

• The Blazers pull away down the stretch, going up 10 with under three minutes remaining. Bynum fouls out with two minutes to go—with two points. The “BEAT L.A.!” chants start shortly thereafter. Z-Bo, sitting on 33 and 10, catches a pass on the perimeter, and decisively steps back behind the three-point line. It’s his first three-point attempt of the game, and it’s nothing but net. Game over, chalupas for all (101-90 is the final). Streamers and stuff drop from the rafters like it was Game Seven of the NBA Finals. It’s a bit much.

• It’s funny, Zach Randolph’s name never gets mentioned much when people talk about microfracture surgery, and I don’t know why. Of all the players who’ve had the surgery, he’s probably the most successful recipient of it. Which plays into my pet theory—that, if you have a solid game to begin with, microfracture surgery shouldn’t be something to fear. It didn’t ruin Jason Kidd. And it sure didn’t ruin Z-Bo.

• After the game, Kobe’s gracious, giving credit to the Blazers (which, given the fact that they shot 51.5% from the floor, is deserved). “They just play well here.” And he goes easy on Bynum, who was pretty much invisible when he wasn’t busy fouling someone. “I had games like that when I was in his shoes, growing up.” Kobe speaks of being a rookie and getting 20 points one night, then doing the same thing the next and getting 2. It happens. Still, at least something went right for Bryant this rainy day: “I had the best nap today ever.” Silver lining.