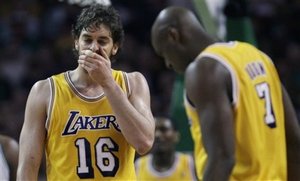 One of the more stunningly bewildering developments in the League’s history took place in a matter of hours last night, and everyone came out of it looking like losers.

David Stern and the NBA’s owners took the biggest hit PR-wise, with their misguided and wholly transparent attempt to control the movement of star players, a decision that (amazingly) came just as they had ratified a new labor deal.

For the players involved in the canceled trade, things are more than a little complicated. There’s talk that Chris Paul might not show up today at the Hornets’ training camp, and that he may even be seeking to take legal action against the NBA.

As for Pau Gasol and Lamar Odom, they’re just saddened and confused by the whole thing.

Lakers officials were still hunkered down in a room at the team’s El Segundo headquarters Thursday night, trying to ascertain what to do next. With training camp starting Friday, they have another problem. In a phone interview with The Times, Odom said he was sad to hear he was practically traded and wasn’t sure he would attend practice Friday. “Maybe I’ll see you there,” Odom said, “but I doubt it. You don’t want to go to no place you’re not wanted. I’ll try to give them what they want as much as possible.”Odom also felt bad for his teammate.

“Imagine how Pau feels,” he said. “Pau came to the Lakers and played here for four years, went to the Finals and lost, won two NBA championships and then got swept [by Dallas]. Wow! Imagine how he must feel. Man, I’m just in total disbelief about all of this. They don’t want my services, for whatever reason. I don’t know what I’m supposed to do. I was proud to be a Laker, so I’ll try to help them in the process as much as possible.”

A person close to Gasol said the Lakers forward was “devastated” by news of the original trade, which was steered by team executive Jim Buss as much, if not more, than General Manager Mitch Kupchak. The trade would have symbolized the Lakers’ shift from finesse, precision and depth in the frontcourt to speed and athleticism in the backcourt.

The most amazing and hilarious part of this whole sad fiasco, is that Phil Jackson basically predicted the whole thing last year. It’s too bad the Zen Master’s no longer around reporters every day so that he could offer up some biting commentary.