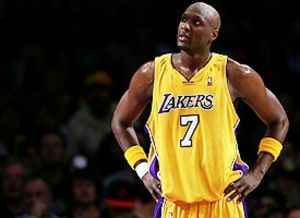 It’s just a one-game suspension, but perhaps it will calm the basketball folk in Portland. Since Paul Allen’s money couldn’t get them out of this one, they wanted blood in retribution. And conveniently enough, well, here’s Lamar Odom!

NEW YORK, March 10, 2009 — Lamar Odom of the Los Angeles Lakers has been suspended one game without pay for leaving the immediate vicinity of the bench  during an altercation, it was announced today by Stu Jackson, NBA Executive Vice President, Basketball Operations.

The incident occurred with two seconds remaining in the third quarter of the  Portland  Trail  Blazers’ 111-94  victory  over the Lakers at Rose Garden in Portland last night.

Odom  will  serve his suspension tomorrow night when the Lakers face the Houston Rockets at Toyota Center.