LaMarcus Aldridge: Kawhi Leonard ‘Has to Do What’s Best for Him’ 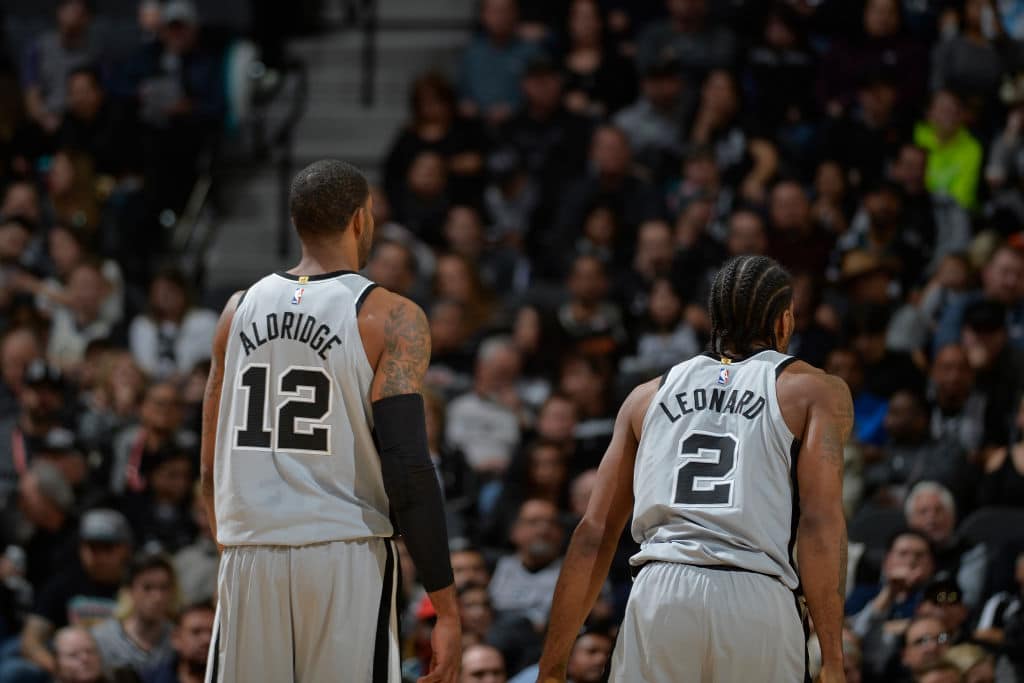 LaMarcus Aldridge concedes that Kawhi Leonard‘s prolonged absence due to a quad injury has made life extremely difficult for the San Antonio Spurs this season, but diplomatically told reporters that Leonard “has to do what’s best for him.”

“It’s tough,” Aldridge said of the circumstances of this season. “We’re depending on guys who really aren’t offensive guys, and I think that showed tonight. We have guys who really don’t score, and teams are exposing that and trying to make those guys score. … But every guy in the locker room has grinded, and tried to get better, and you’ve got to consider that.”

When asked about his view on the Leonard situation, Aldridge made it clear that’s a topic he won’t touch.

The Spurs can offer Kawhi a five-year, $215-million supermax extension this summer, but given their strained relationship, whispers of a possible trade have only grown louder as he remains apart from the team.

San Antonio is down 0-2 in their first-round playoff series against the defending champion Golden State Warriors.

It's a bad look for Kawhi Leonard and the Spurs – and he's about to make it worse @spurs #nba @nbaplayoffs2018 https://t.co/ODAL1coOBD

He occasionally texts with some of his teammates, but according to [Pau] Gasol leaves others in the dark. And the fact he has been absent from San Antonio for weeks and is not expected to sit on the bench for Game 3?

No one can speak for Popovich, but some of his closest confidants suspect that if the relationship remains strained and the lack of communication persists, he will pursue a blockbuster trade during the offseason and commit to a parting of the ways. Already, according to multiple reports, several teams are assembling packages that might appeal to the Spurs.

“We have been trying to adjust,” [Manu] Ginobili said as he walked toward the bus Monday night, “but it’s really hard in this league when you have post-up guys like L.A. (Aldridge), but we don’t have a go-to guy on the outside. So we have to make Rudy [Gay] a go-to guy out there. We shot what, 4 for 28 from 3? You can’t win like that. It has just been a really, really tough season.”