Lamond Murray on the MVP Race, Young Shaq and the ‘Clippers Curse’

We caught up with the former Clipper at AmEx's "Paint the Town Platinum" event at Staples Center over the weekend. 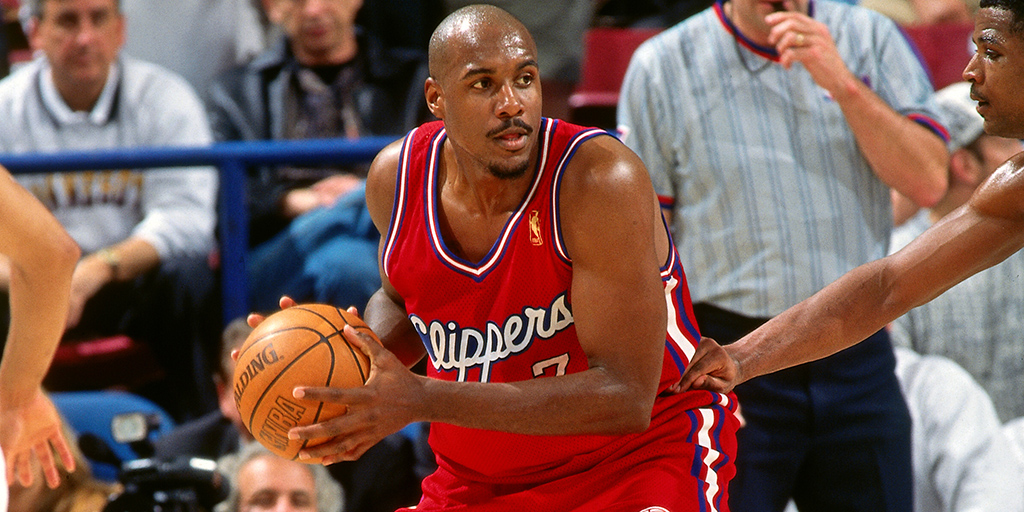 This past Saturday, American Express hosted “Paint the Town Platinum,” a new campaign to celebrate the launch of its newest Platinum Card at Staples Center during the Clippers-Lakers game. The event, which took place inside the Hyde Lounge, was an exclusive VIP experience for AmEx cardholders and local L.A. personalities. Attendees were greeted with gift cards to the Team L.A. store, and former Clippers forward Lamond Murray was in attendance posing for pictures, signing memorabilia and watching his former team take down their crosstown rivals, 115-105, before they get ready for the Playoffs.

Murray was drafted No. 7 overall in 1994 and spent five seasons in Los Angeles, then played for the Cavaliers, Raptors and Nets before retiring in 2006.

We caught up with him during the game to talk Clippers, Shaq memories, James Harden or Russell Westbrook for MVP, the Clippers Curse and more.

Scroll through the gallery above to check out photos from the “Paint the Town Platinum” event, and keep reading below for our interview with Murray.

SLAM: What’s life after the NBA been like for you?

Lamond Murray: Life is awesome. I get opportunities like this to come up here and represent for American Express and the Platinum Experience, do clinics and camps with the kids and I give back in all those different type of ways. Life is good for me. My company, Stream World, we’re doing our thing with the streaming device—just all over the place with different projects and different opportunities and I’m just happy to be around.

SLAM: You’ve done a lot of youth camps with the Clippers in the past. What’s something you make sure the kids take from you during that experience?

LM: First thing, with the kids nowadays, you just want them to have an understanding of not leaning on their parents as much as they’re used to and taking ownership of who they are as people and understanding that they have to stand alone when they come into our camp. Once mommy and daddy leave for the day, they’re going to be held accountable for everything they do at the camp—good or bad. It’s just one of those things where I feel like I’m a teacher to not only the game of basketball but of life experience and making [the camp] a life experience for them so they can take with them anywhere.

SLAM: And what about for your own kids? They play ball too, right?

LM: It’s good for them because they’ve been around the sport for so long. They were born into the game of basketball and have been in the back with Kobe and Shaq, walking around hallways. They’ve already kind of been given that opportunity to see that limelight from the backstage and see all the pitfalls that can come with it. Just their life experience alone, I really don’t have to say much. They’re good kids, they take care of business and they’re always ready for opportunities. That’s one thing about them growing up in that atmosphere I’ve taught them and they’ve been able to prosper from then on.

SLAM: Speaking of Shaq, his statue now hangs outside of Staples Center. Do you have any Shaq stories from your time in the NBA?

LM: My rookie year, he was in Orlando and you walk on the court and you don’t really expect him to be as big as he is and he’s there. Then you don’t expect him to be as dominant as he is and I remember trying to come up from behind and block one of his dunks, trying to sneak him from behind and I remember hitting his body and bouncing the other way and him dunking the ball. He was looking around like, ‘Who’s that little fly that just hit me?’ [Laughs]. It was one of those things where you say you’ll never do that again and just move on and stay away from that guy.

SLAM: What’s it been like to see the growth of guys like Blake Griffin and DeAndre Jordan?

LM: It’s funny because I had the opportunity to see DeAndre before he got drafted to the Clippers. He was working out at the gym at Spectrum, a sports club out here back in the day, and just to see what he looked like then to what he’s become now in terms of his body, being the ultimate professional, being in shape, watching him play and develop his game to where he’s able to hit shots now and being a better free throw shooter than he was when he came to the team. It’s always a progression with the younger players and after two or three years, you get to see that in person. It’s just a beautiful thing to watch for them to become All-Stars and all that stuff.

SLAM: The Clippers are currently the 5-seed in the West. How do you think they’ll fare come playoff time?

LM: The biggest thing is just making sure they’re ready towards the end of the season. They’ve dealt with a lot of injuries last couple of years and again mid-season, so just making sure everybody is healthy is half the battle. Moving forward, I think they know this is one of those opportunities that their back is up against the wall, and I think they play well when their back is up against the wall. I’m looking forward to what they do in the Playoffs no matter where they’re at.

SLAM: This might sound a bit weird, but do you think the “Clippers Curse” is real?

LM: You start to wonder. [Laughs] That’s all I gotta say. I’ve watched the collapse against Houston; we all saw what happened with Donald Sterling. We thought him moving on, the curse would disappear, but you know, it still seems like it’s still lingering around. The future will tell, but we’re hoping for the best.

SLAM: A lot of ex-players have strong opinions on the way the game is played today. What are your thoughts?

LM: Like anything, the game is always evolving and changing. The fans always want to see something different, you know? This is what we saw in the ‘70s and ‘80s in terms of a high-paced kind of the game, the 6-9 centers, and the 6-4, 6-5 and 6-6 players that just play all-around basketball. It’s not the first time we’ve seen this trend and the trend is going to change again. We’re going to get back to dominant [centers] inside, guys playing with their backs to the basket. The fans are going to want to see people fighting again, so it’s going to change every 10 years I think.

SLAM: Who is your pick for MVP this year, and why?

LM: You always look at the MVP on what they’ve done for their team, as well as the stats that they’re putting up. I would say whoever had the best record at the end of the season and whoever put up the best numbers. You always have to compare both—best record and best numbers—you can’t just have a guy like a [Russell] Westbrook who’s putting up triple-doubles, that’s amazing, but if they don’t have the same record as another guy that’s similar or comparable, it should always go to the guy with the best team and who has a chance at winning a championship.

Photos courtesy of the AmEx “Paint the Town Platinum” event