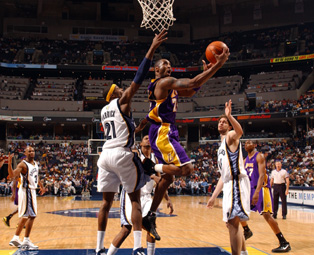 Just finished watching the second half of Lakers/Grizzlies, and saw Kobe go for an insane 60.

Kobe was pretty much brilliant tonight, especially down the stretch when it was still a close game. For a while the Grizzlies — who, let’s be honest, will never be mistaken for a defensive juggernaut — were doubling Kobe with their point guard, basically giving Shammond Williams wide open threes. And at one point Kobe drove to the rim and threw a perfect behind-the-back pass to Kwame Brown, who treated the ball like a birthday cake and let it slip through his hands out of bounds.

Where Kobe was awesome was in the way he got his, especially in the second half. He didn’t seem to be forcing anything, instead dishing it when he was doubled and driving when he was covered one-on-one.

Oh, and the Lakers won. This makes them 3-0 in their last three games, in which Kobe has scored a combined 175 points.

The sports journalism world love trying to quantify and rate things, to decide who is the best of all time, which team would win in a seven game series, etcetera. And we could argue Kobe’s place among the all-time greats forever.

I don’t know what else to say about Kobe without being called a hater, so maybe, just this once, let’s all just shake our heads and agree that Kobe is really damn good.