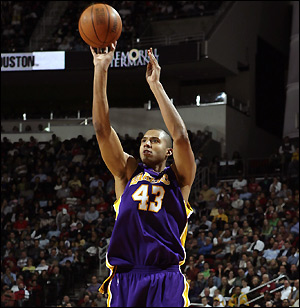 Everywhere you look these days—from Steve Kerr’s rankings, to Rubenstein’s next Dirty 30—the Los Angeles Lakers are receiving a ton of love. People are psyched to see Kobe embracing the team game (number twenty-four has upped his assist totals from 4.5 a game last season to 5.5 this year, and the MVP talk is heating up); Phil Jackson’s coaching genius is no longer in question (assuming it ever was); people sat up a little straighter in their chairs after the Mavs’ 13-game winning streak ended at Staples; and some have begun to suggest that a Pacific Division crown isn’t out of the question.

There’s just one little problem, something no one seems to want to admit. As much as I enjoy this team (believe me, as a Laker supporter, this hurts to write), they’re simply not an elite squad. Not yet. Not until they can win on the road, anyway.

Have they improved? Without a doubt. Had Odom gone down at the same time last year, would they have enjoyed similar success? Probably not. Could they win a playoff series in the West this season? I don’t see why not. The problem will be going any further than the second round.

Not taking into account tonight’s game (in Houston facing a reborn T-Mac and his Rockets), the Lakers are 11 games over .500 and sit comfortably in second place in the tough Pacific. The gap between them and the Suns (and true NBA Powerhouse status) isn’t enormous. The question then becomes, Can they close it? I say no. Not with a 7-8 record away from the friendly confines of the Staples Center.

Road Woes: Though they have managed to beat some of the League’s upper echelon teams (Utah, San Antonio, Phoenix, and Dallas), none of those impressive wins came in enemy territory. Phoenix on the other hand, is 11-5 away from home; Dallas and San Antonio share similar 12-5 records on the road; and Utah is 10-8 away from the Delta Center.

Odom Factor: Hard to tell, since until he went down in mid-December, L.A. had gone 3-3 on the road with Lamar in the lineup.

This team’s improvement, seen mostly in the increased fluidity of Phil and Tex’s precious Triangle offense, has been great to watch and I think they have the potential to be a force in the League. But until they get their act together on the road, that’s all they will be. Potentially great.