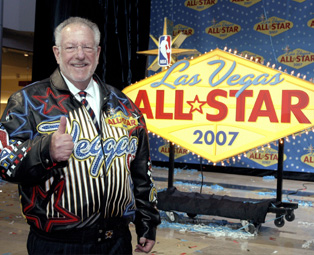 Oscar Goodman and his wife moved to Vegas in 1964 with $87 in their pockets. After carving out a successful career as a defense attorney for some notorious characters — spawning a book about his life titled OF RATS AND MEN — Goodman has served as mayor of Las Vegas since 1999 and has been instrumental in luring the NBA to Vegas.

I got Mayor Goodman on the phone a few weeks back for a Q&A that’s running in SLAM 106 (on newstands now!).

Here’s an excerpt from our conversation…

SLAM: So how does a guy go from being a defense attorney for people like Meyer Lansky to being the mayor of one of America’s fastest-growing cities?

GOODMAN: Well, maybe Vegas is the only place that could happen. I’ve had a great career, played myself in the movie Casino, and traveled all over the country representing folks accused of crime and protected their constitutional rights. And after doing it for some 35 years I said to my wife and children that I’d like to do something different, that I’d like to run for mayor of Las Vegas. They said there was no way I could win, that I had more baggage than the skycaps at the airport. I was right and my kids were wrong, and I’ve had a ball in my second life here.

SLAM: How did hosting the All-Star Game come about?

GOODMAN: Basically, I got a call from the Maloof brothers one day out of nowhere asking if they could come down and see me. They came down here and said, How would you like to have the All-Star Game? I said, No way! And they said, Yes way! They said they thought if I’d call the commissioner and tell him I’d ask the casinos to take the game off the board because it’s an exhibition game, and that if they’d go for he might be interested. So I got on the phone with the good commissioner, and Commissioner Stern said if the game was taken off the board he’d certainly consider it. It’s been a love affair ever since.

SLAM: What are the chances of getting an NBA Franchise in Vegas?

GOODMAN: I’m a betting man, OK? I bet on anything that moves. I’ve been known to bet on which way a cockroach will turn.

SLAM: OK, so give me some odds.

GOODMAN: Well, if you follow sports it’s called an out-price, and there’s no way in the world we won’t have a team here. It’s just a matter of when.

SLAM: Why do you think this is going to happen now?

GOODMAN: Well, I’m not the youngest mayor in the world, so I’d like to see this happen while I’m in office. Also, I think once all the owners come out to Vegas and spend a week here, they’ll see that this community is really thirsting to have an NBA franchise.

SLAM: Do you think you can get the SLAM crew an upgrade at our hotel?

GOODMAN: I can do anything as long as you don’t try to take my showgirls from me.