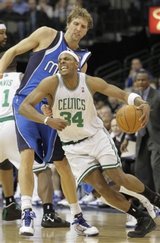 By opting out of their current deals — and each forfeiting $21.5 million next season — Dirk Nowitzki and Paul Pierce have now joined the free agency party.

Mavs fans have little reason to be nervous, as Dirk isn’t expected to play anywhere but Dallas next season. Here’s the latest from the Star-Telegram:

For the first time in 12 years, Dirk Nowitzki will not be a Dallas Maverick when the clock strikes 11 tonight. His free agency, confirmed Tuesday when his notification that he will opt out of the final year of his contract arrived at the Mavericks’ office, is not expected to last long. In fact, when he wakes up Thursday morning in Germany, he’ll likely have a handshake deal waiting for him.

“My intention is to get on a plane and go to Germany with flowers and chocolates,” said Donnie Nelson, the Mavericks’ president of basketball operations. “The only way I don’t expect to go is if they tell me not to.”

According to the Telegram, Nowitzki will likely secure a deal that pays him $96 mil over the next four seasons from the Mavs.

Pierce’s situation is a tad different, and there’s a sense of uncertainty in Boston about The Truth’s situation going forward. ESPN reports that Paul will explore all of his options as a free agent:

Pierce’s name has scarcely been mentioned in the buildup to the summer of 2010 free-agent bonanza because, as with Dallas’ Dirk Nowitzki, most rival executives believe that the Celtics would never allow the 2008 NBA Finals MVP — who has maintained for some time that he wants to retire a Celtic — to leave the only team he’s ever known.

Pierce, though, could wind up emerging as one of the more interesting big names to track. Sources close to the situation told ESPN.com that Pierce will begin free agency by talking first to the Celtics when the market opens on Thursday at 12:01 a.m., but the 32-year-old is preparing to field other offers. External interest in Pierce is hard to forecast because his potential free agency has been widely regarded as a formality for so long and because of the heavy load he has carried for the Celtics in recent seasons. But with so many teams stockpiling significant salary-cap space for this offseason, it’s conceivable that Pierce will wind up attracting multiple suitors looking for a title-tested scoring option.

For both Pierce and Nowitzki, it’s all about ensuring their financial security after next season, with the threat of a lockout looming over everything.